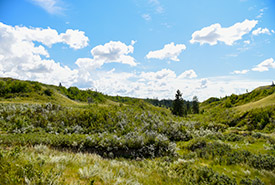 The Meyers property is a 68-hectare (169-acre) easement located along the Battle River, a tributary of the North Saskatchewan River.

The Battle River is a prairie-fed river and depends on local rainfall and snow melt for its water supply, making the adjacent lands critical to its annual flow. Almost all of the land surrounding this easement is cultivated, making the conservation of the native habitat found on the Meyers property, such as aspen and prairie flora, even more critical.

The Meyers project contains areas of riverside vegetation, grasslands and forests. It is located approximately 100 kilometres northeast of Red Deer.

Riverside areas, called riparian zones, are an important component of this property. They stabilize the river banks, prevent erosion, help decrease the impact of flooding and filter out sediments and pollutants.

The area is home to a stand of Manitoba maple trees, which are considered a rare community type in Alberta when found growing naturally in the wild. It also provides habitat for many species of mammals, insects, waterfowl, songbirds and fish, including northern pike, walleye, mooneye and goldeye.

The Meyers property, combined with an adjacent 486-hectare (1,200-acre) easement also held by NCC, creates several miles of conserved riparian lands along the river valley of the Battle River.

The Meyers property was purchased by Flagstaff County in 2012. Due to its location alongside the river, the County recognized its need for conservation. They approached NCC about a conservation agreement for the property.

This project represents the first time NCC and Flagstaff County have partnered to conserve property owned by the municipality.

Looking into the future, Flagstaff County will continue to manage the land with the support of NCC, while maintaining the property’s uniqueness by keeping it in its natural state for long-term conservation.

Other support from this project came from the North American Wetlands Conservation Act, U.S. Fish & Wildlife Service and Repsol Canada.

The potential for recreational vehicle use could be a threat to the property due to existing trail segments from past property use. As the Meyers property is a sensitive habitat and the potential for erosion is high, this is something that will need to be managed moving forward.

Other threats to this area include invasive plant species like Canadian thistle and perennial sow thistle, both of which are found on the property. These invasive weeds are aggressive, persistent, evasive and difficult to eradicate, which can cause lasting negative effects. Native plants have a difficult time competing with these invasive species.