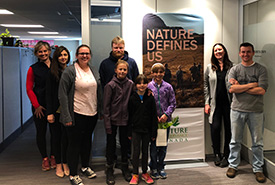 Nine-year-old Aleksie Lilles is in Grade four and wants to help the recovery of swift foxes. This year, she ran a fundraising campaign at her school to raise money for these endangered foxes, which are about the size of a house cat and can run as fast as 60 kilometres an hour.

With a population of only 650 in Canada, and an even smaller population of 100 in Alberta, the swift fox is classified as threatened under Canada’s Species at Risk Act. This species is facing a high risk of going extinct or becoming extirpated (extinct within the borders of Canada).

When Aleksie found out that swift foxes are in trouble, she decided to take action.

“First, I did research about swift foxes on what they eat, where they live, why they are endangered and did a report for school,” she explained. “My class thought of how to help. We raised money by selling raffle tickets every day at lunch for a week, advertised the raffle over the loudspeakers and on a poster in the plaza, and told other kids about the swift fox.”

The whole school came together to help make this donation happen. From teachers and staff donating candy, books and toys for the raffle prizes, to Aleksie’s classmates buying tickets, this project got everyone involved.

Aleksie’s goal was to raise $100, but she ended up raising over $800, which she and her mom, Heather, chose to donate to the Nature Conservancy of Canada (NCC). They wanted to make sure the donation was going to help the swift fox specifically.

In July, 2018, a den of swift foxes was discovered on an NCC conservation site in southeast Alberta. This is the first time a wild population of swift foxes has been present in Alberta in over 80 years! 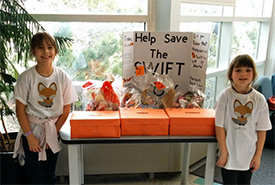 “I am very proud of her," Heather said. "Both for tackling her own fears, putting in all the hard work, and especially for caring about one ‘little’ animal she had never even seen before.”

As to why the swift fox is threatened, Aleksie says it best: “I learned that farmers sometimes planted crops where the swift fox used to live, and then the fox couldn’t see because the crops were too tall, so they couldn’t hunt rabbits and prairie dogs. I was a little sad to learn they ate rabbits, but that’s nature.”

Habitat loss and fragmentation is the largest threat the swift fox faces today. The Canadian prairies are the world’s most endangered ecosystem, and that’s where this species of fox calls home. NCC conserves some of the largest intact areas of this ecosystem in the Prairie Grasslands Conservation Region, which is open to be explored and enjoyed by the public.

NCC would like to extend a big thank you to Aleksie and her classmates Alexis and Lexie for all their hard work. We would also like to thank Mrs. Cooper, Aleksie’s fourth grade teacher, for her role in supporting this project and Aleksie throughout the year.

NCC is honoured to receive this donation. With the funds raised by incredible donors like Aleksie, we will continue to conserve and steward land that will hopefully provide habitat for even more swift foxes one day.