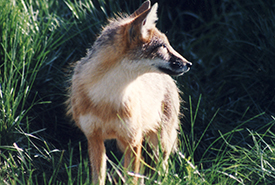 The Cochrane Ecological Institute (CEI) began a recovery program over 30 years ago to breed and reintroduce swift fox — an endangered species — back into the wild. After decades of hard work and dedication, this incredible organization has brought the swift fox back to Alberta and Canada!

In 2018, a den of swift foxes was discovered on a conservation site in southeast Alberta owned by the Nature Conservancy of Canada (NCC), which proves that this endangered species now has a small but stable population in Canada. This is the direct result of CEI’s breeding and reintroduction program.

The Cochrane Ecological Institute is a charity and non-profit that works to maintain biodiversity, conserve native species and restore native habitat in Canada. A large part of their work focuses on rehabilitating orphaned and injured wildlife and educating the public with their outreach program. CEI has another goal: to protect endangered and extirpated (locally extinct) species through their breeding and reintroduction programs.

CEI’s swift fox reintroduction programs began in 1972 when it became clear that the species was in trouble. By this time, swift foxes were still present in Alberta, but there weren’t enough to survive in the province long term.

The only captive swift foxes in the world today are in the care of CEI, and every animal will eventually be reintroduced to the wild.

But swift foxes aren’t the only species that have benefited from CEI’s efforts. The organization has also worked alongside the Canadian Wildlife Service to develop reintroduction programs for trumpeter swan and wood bison. 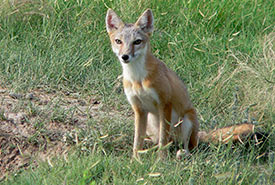 Now that the swift fox is back in Canada, the next challenge is to make sure the population is stable and hopefully growing. When trying to get an idea of how many foxes are in the wild, CEI uses non-intrusive methods, meaning that these methods don’t harm or leave a lasting effect on the animals. Stressed or hurt animals have a lower chance of surviving in the wild, so it is important that when trying to estimate the size of a population we are not making it harder to survive.

The two methods CEI uses to survey swift foxes is through hair traps and fox vocalizations.

A hair trap is meant to snag some of the animal’s hair when they rub against it. Usually strong-smelling substances, like meat or perfume, are used to encourage the animal to come check out the trap. CEI has DNA records of all the foxes they have bred in captivity and released. Whenever hair is collected, the DNA is analyzed and CEI can determine if it’s a new fox or a fox that’s been released. If it’s a new fox, DNA testing from the hair trap can also tell who the parents are.

Like people, each fox has its own unique voice. They only make calls, known as vocalizations, during the mating season. This can give CEI an idea of how many swift foxes are old enough to mate and also helps surveyors estimate what the size of the population will be in the following years.

For a time, swift foxes were gone from Canada, but thanks to the efforts of CEI, this species now roams our prairie grasslands. NCC will continue to conserve grassland habitat to provide a safe home for species at risk, like swift fox, that depend on this habitat for their survival.