Spending an evening with the moths 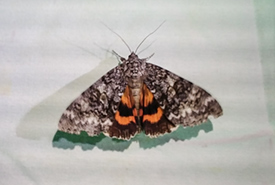 Connecting Canadians to nature happens in a variety of ways. At the Nature Conservancy of Canada (NCC), this sometimes involves encouraging people to visit a nearby Nature Destination. It can also take the form of showing our supporters how their donations have helped NCC conserve habitat.

NCC’s Leaders in Conservation (LICs) are donors who contribute $1,000 or more annually to the organization. To thank LICs for their important investment to conservation across the province, we occasionally host special events just for them. For example, we recently held a series of Nature Walks, which were led by Calgary naturalist Gus Yaki, and an upcoming event features a very special guided hike in the Crowsnest Pass to watch the golden eagles’ great migration.

A recent Night with the Moths event was held on an NCC property in the Beaver Hills, east of Edmonton. Local lepidopterists Loney Dickson and Dave Lawrie from the Alberta Lepidopterists Guild conducted an evening moth survey with our LICs.

Lepidopterology is the study of moths and butterflies. Alberta has a diverse range of habitats, where 2,500 species of butterflies and moths are have been discovered. According to the Alberta Lepidopsterists Guild, there are still approximately 500 more species that have yet to be identified. 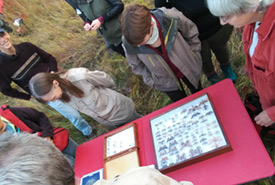 A Night with the Moths (Photo by NCC)

As one of the best times of day to observe moths is the early hours of the evening, on September 7, 18 people, including NCC staff, neighbours and LICs, assembled at the Campbell property as the sun dipped toward the horizon.

The evening began with a round of introductions, an overview of lepidoptery and an explanation about what species the group may expect to see over the coming hours.

As the sun descended, the group hiked up to a small hill on the property and set up their camp chairs for an evening of observation. To attract moths, Dave and Loney set up a white sheet strung between two poles. They then mounted a lightbulb over the sheet, as everyone sat in their camp chairs and waited. It didn’t take long before the first lepidoperta began to arrive. Once the moths landed on the sheet and ceased their fluttering, the group was able to approach and attempt to identify the insects based on their size, marking and wing shapes. 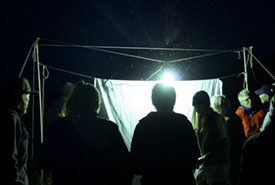 A Night with the Moths (Photo by NCC)

Some of the species identified included two types of underwing, striped ghost moth and aspen twoleaf tier. From 7 p.m. to 11 p.m., more than 25 species of moths were observed, but they weren’t the only insects of interest. The Campbell property contains many small wetlands, which are ideal habitat for giant water bugs. Drawn by the light, nine giant water bugs decided to investigate.

With the appearance of a dead leaf, giant water bugs are Alberta’s largest aquatic insects. Several brave attendees overcame their fear of big, scary insects to hold these pre-historic creatures in the palm of their hands.

Moths are a vital part of the ecosystem. These mostly nocturnal flyers are important pollinators, as their hairy bodies pick up pollen from every flower they land on. Moths — and the caterpillars from which they evolve — are also food for many other types of wildlife, such as birds and bats. These fascinating insects are indicators of a healthy environment because when ecosystems are healthy, they will sustain a large number of moths. This is why it’s so important to survey them and identify their numbers on conservation sites.