First time for everything

An introduction to Conservation Volunteers 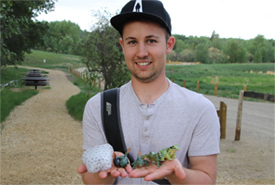 Steven Siffledeen has a passion for biology, so when his mother told him about an upcoming Nature Conservancy of Canada (NCC) Conservation Volunteers (CV) event to survey amphibians at Bunchberry Meadows, he didn’t need a lot of encouragement to sign up.

Steven grew up surrounded by nature; from his backyard in a rural area north of Edmonton full of wild animals, to weekend trips with his family to the mountains. He recently completed a biology degree from the University of Alberta.

These days, Steven spends much of his week doing construction in downtown Edmonton to help pay off his student loans. Although much of it is done outside, he says that being outdoors in the city doesn't bring him the same joy as being surrounded by nature in a park or the mountains.

On the day of the NCC event, he drove out to Bunchberry Meadows Conservation Area, where he joined a group of more than 20 other volunteers and NCC staff gathered by the parking lot. Everyone was dressed in rain boots and carrying headlamps. They were well prepared for an evening spent combing through the property's wetlands for frogs and toads.

Amphibian expert Brian Eaton, a volunteer with the Friends of Elk Island, kicked off the event with a description of the amphibians being surveyed, as well as an overview of their mating patterns and life cycles. He explained how to safely catch and handle the amphibians so the group could examine them, and then sent everyone on their way.

Steven and the rest of the volunteers walked around the edge of the wetland, bending, crouching and peering through the mud on the outskirts of a dugout for the slightest sign of movement. Throughout the evening, several frogs were caught, along with a tadpole and a gartersnake.

Halfway through the event, Brian began broadcasting different amphibian calls over a speaker to teach volunteers how to identify different species by their unique calls.

"It's all coming back to me," said Steven, who remembered the calls being played during an auditory exam in one of his biology classes.

Toward the end of the outing, the volunteers took a seat overlooking the lake on the other side of the property and listened to the call of a frog across the lake, as the sky turned from light blue to soft shades of pink and purple over the tree-speckled horizon.

Steven looked around at the lush green foliage on the trees and the reflection of the colourful sky on the calm lake. He said that although he’s in construction now, it isn't where he sees himself working long term.

Eventually he'd like to work outside, in the “real” outdoors, not just in the city next to traffic lights and cement sidewalks. He dreams of pursuing a career in something similar to NCC's work, in either the field of conservation or restoration.

Steven stayed behind until the very end, chatting with the volunteers as the sun set at 11 p.m. and the last few cars exited the parking lot, bringing his first CV outing to an end. He says he enjoyed the event and looks forward to attending another in the near future.

“I liked being able to work with like-minded people,” he said.

If you are interested in learning more about NCC’s CV program or finding an event near you, visit conservationvolunteers.ca.