Gearing up support for NCC

Stephen Thor cycles from Calgary to Ottawa to support NCC 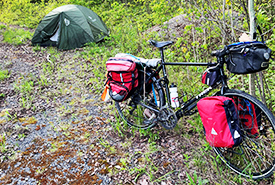 Over the years, people have supported the Nature Conservancy of Canada (NCC) in many ways, but only a few have travelled thousands of kilometres in their efforts.

Stephen Thor, a longtime NCC supporter whose passion for long-distance cycling has taken him across Canada, thought to put his pedalling to good use. Last spring, Stephen hit the road with the intention of completing a cycling trip across the nation to raise money for NCC.

Stephen began his ride from Calgary on April 18 and headed east, a bold move that early in the season, due to cold winds and uncertain weather.

“I was usually the first person cycling long distances that anyone saw along the Trans Canada,” he says. 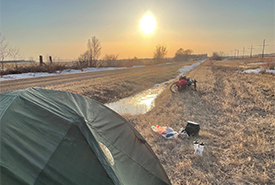 The day begins and the ride continues (Photo by Stephen Thor)

It was his second attempt at the journey in as many years. During last year’s attempt, he was forced to turn around at the Manitoba/Ontario border as it was closed due to COVID-19 restrictions.

While both trips were chilly, conditions this year were harsher, he says.

“It was a lot colder, with rain and snow,” says Stephen. “Plus, Lake Superior was still frozen in places, and the smaller lakes had ice on them most of the way across.”

But that was fine by him. Being exposed to the elements is one of the things Stephen likes about his rides.

“You’re looking at the clouds coming by, and you’re tracking thunderstorms,” he says. “You’re like a cow out in the field — you can’t get away from it.”

Stephen’s original plan this year was to travel all the way to Newfoundland, then fly to Victoria before cycling east to Calgary, to traverse Canada entirely. But with the inclement weather and having an engagement to get back to, he decided to call his trip complete in Ottawa. 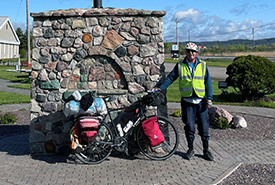 Despite missing his ambitious goal, completing this journey was no small feat. After 38 days on the road, Stephen pedalled over 3,300 kilometres, while raising funds for NCC’s conservation work.

This trip was a chance for Stephen to be immersed in the surrounding nature and focus on the road ahead.

“It was a chance to see Canada and its natural environments in all their glory, which change throughout the ride,” he says. “As you go from Calgary, you get short-grass prairie, then mixed-grass prairie in Saskatchewan, and by the time you get to Manitoba, you’re among long-grass prairie.”

One reason Stephen started in the early spring was to travel before the trees have spread their leaves.

“That way you can see the views through the trees, and you can see all the birds,” he says. 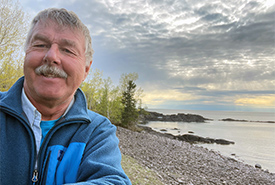 Stephen snapping a selfie on his trip (Photo by Stephen Thor)

As the landscapes changed, so too did the birds, he says. “As I was passing a swamp, I’d hear a lot more ducks and shorebirds. Then, on the Prairies, you’re listening to meadowlarks. It was springtime, and the birds were in their breeding season.”

After experiencing so much nature first-hand, Stephen felt far from weary at the end of his trip.

“I just felt rejuvenated,” he says.

Not that type of honk

One of Stephen’s most memorable experiences from his ride was a close encounter with one of his favourite species.

Camping beside a road one night, he heard a noise. 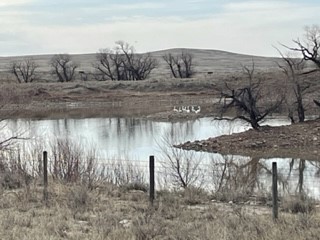 A group of swans Stephen encountered (Photo by Stephen Thor)

Soon after, he realized the sound was not from a vehicle, but from a pair of trumpeter swans nesting in a wetland nearby. Trumpeter swans, being well on the path to recovery after their populations crashed last century, are a story that brings Stephen hope and reaffirms his passion for conservation.

This passion has driven Stephen to support NCC. If you would like to join him in supporting our efforts to accelerate conservation, consider donating today.