Guardians of the Grasslands 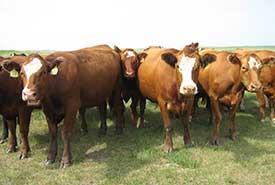 “Sometimes what you thought was the problem, is really the solution” - -Guardians of the Grasslands

The Story Broker Media House has released its award-winning short documentary Guardians of the Grasslands, which is now available to the public after making the rounds at many prestigious film festivals across Canada. Guardians of the Grasslands is a documentary discussing the threats facing Canada’s native prairies, and the seemingly unlikely solution.

Unknown to many Canadians, one of the world’s most endangered ecosystem lies not far off in a different continent, nor deep underwater, but right here in our backyard. The Canadian native grassland is critically endangered, having already lost 74 per cent of its historic range.

This loss is mostly due to conversion, cultivation and other land uses. However, there is one form of land use that not only protects our native grasslands, but also enhances them: cattle grazing.

For thousands of years, the Prairies relied on herds of bison to thin out grass and fertilize the soil. In the years since their disappearance, cattle have now taken over that role. Guardians of the Grasslands discusses the role that ranchers and their herds have in sustaining the grasslands.

The Nature Conservancy of Canada (NCC) is proud to have participated in the making of Guardians of the Grasslands, and we are proud to have worked with many ranching families across Alberta and the rest of Canada. Most of Alberta’s prairies are under private ownership, and we acknowledge the unique role that landowners hold in conserving heritage land for future generations.

To get involved in prairie conservation, there are numerous paths you can take. Many organizations such as NCC rely heavily on volunteer work. Both fundraising endeavours and hands-on conservation work, such as such as weed pulling, fence removal and other maintenance tasks, are crucial to conservation efforts. Due to COVID-19, many of these events have been put on hold, but spreading awareness of issues faced by our grasslands is still an important step in making sure our inland sea of grass remains intact for generations to come