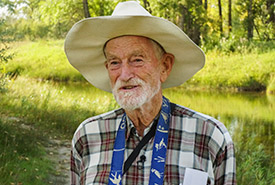 Gus Yaki is a familiar face among Calgary’s birding and botany communities. After retiring from the RCMP, Gus decided to invest in environmental pursuits; at age 72 he created birding courses with the Friends of Fish Creek Provincial Park Society. These courses now attract close to 300 participants annually and run 38 weeks every year. They’ve been such a success that Gus has trained 30 leaders to assist him, and created an additional botany class to meet demands.

In 2019, at age 87, Gus received a Top 7 Over 70 award. These awards celebrate community members over the age of 70 who have made vibrant contributions to the community.

"Gus inspires with a blend of charm and deep, almost instinctual, knowledge," says Susan Church, one of his award nominators. "This is offered up without preaching or lecturing — gentle nudging, yes — and most importantly with a great sense of humour."

Since turning 70, it is estimated that Gus has presented to 7,000 people, at schools, parks, libraries and community centres across Alberta.

“On Canada’s 150th birthday, he led a walk across southern Alberta to raise awareness for the need to conserve our native grasslands. He took a group of people with him and taught them the importance of this fragile ecosystem because he genuinely cares about the plants, animals, and birds that live in this province. He was 84 years old at the time. He is a truly incredible person,” she continued.

The first Top 7 Over 70 awards gala was held in 2017. The awards were founded by Calgarian Jim Gray, who noticed an increasing number of people beginning new ventures after the traditional retirement age, and that many awards were dedicated to demographics other than older adults.

More than 800 people attended the October 17, 2019, gala to celebrate this year’s award recipients, all of whom were over the age of 80. The other award recipients this year were Sylvia Rempel, Jacqueline Cameron, Dr. John Lacey, Bob Brawn and Ken Stephenson.

Galas are held every two years, with the next one anticipated for 2021.

Every day Gus inspires people to care about the plants and animals that share this province with us. He teaches people to appreciate the great outdoors, passes on his knowledge and fosters a love for nature in everyone around him.