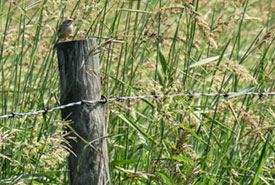 Bird on fence post at Golden Ranches (Photo by NCC)

The Golden Ranches project is located within the Beaver Hills natural area, east of Edmonton. It is managed by several partners, including the Nature Conservancy of Canada (NCC), Alberta Conservation Association, Alberta Fish and Game Association and Edmonton & Area Land Trust.

This summer, NCC received funding from the Alberta Fish and Game Association’s 2018 Minister's Special Licence Grant, which will be used to make over 11,000 metres of fencing around the property more wildlife-friendly.

Fences are sometimes used on properties, such as Golden Ranches, as part of conservation and stewardship efforts to protect the land from trespassers. The barbed-wire fencing on this property currently contains a mix of both four- and five-barbed wire strands, which is a legacy from the property’s days as a horse ranch. This fencing is now considered to be a hazard to wildlife in the area. NCC hopes to one day remove all of the fencing in the area, but for now the wire removal of the additional, unnecessary strands is a good start.

These fences pose a particular threat to animals that are young, pregnant or in stressful situations. Although wire barbs are not always immediately deadly, the scratches, tears and infections they can inflict can hurt the animals and reduce their chances of survival.

The need for action on Golden Ranches became clear in 2017 when an animal died as a result of a run-in with barbed wire on the property.

Removing fences in their entirety is ideal, but not always feasible due to the need to keep things in or out of the property. Thankfully, different strategies exist to make the fences less dangerous. NCC hired a contractor in August to take the fences down to three wires, by taking away the top and bottom wires. It is now easier for animals to make their way under or over the fences without getting nicked or tangled.

This change in fence design will help improve habitat for elk, mule deer and other species that live in the Beaver Hills area by allowing them to move safely across the landscape. This grant will also help partners by reducing damage costs to the fences and improve the experience of those coming out to visit the Golden Ranch property in the future.