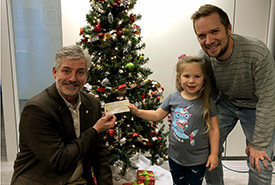 Nellie Ross is five years old and is already leaving her mark on the world of conservation. For the past three years, she has picked an animal from the Nature Conservancy of Canada’s (NCC’s) Gifts of Canadian Nature campaign and raised funds in support of that species.

“Narwhals have become my favourite animal, but I like all animals,” she said.

To help these animals, Nellie decided to sell “narwhal tusks”: hot chocolate mix with marshmallows all packaged in special pointy bags. She also shared a narwhal fact with every customer who bought one.

“I learned that a narwhal’s tusk is actually its left tooth,” she said.

Nellie raised $200, and in December she travelled to NCC’s Calgary office to deliver her cheque in person.

When Nellie isn’t refining her fundraising skills, she enjoys exploring the outdoors. Her favourite place is Big Hill Springs Park outside of the town of Cochrane, and her favourite things to do are hiking and exploring with her dad. 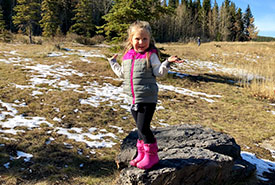 “It is really special to have Nellie taking an interest in conservation at such an early age,” said Steve, Nellie’s father. “Nellie worked really hard to learn everything she could about narwhals and what can be done to help them. As a parent, it’s inspiring to watch philanthropy and caring for our planet grow in your child. We couldn’t be more proud of Nellie.”

“I like raising money for NCC because NCC helps animals to have better homes to live in. When I grow up I want to be a scientist that helps animals,” says Nellie.

Nellie also hopes that her efforts will encourage her friends and classmates to take action as well.

“I hope other kids will join me in raising money and helping animals,” she says.

In the past, Nellie has raised money for caribou and snowy owls, and she is already planning to support butterflies next year.