The rippling surface of a river. (Photo by Sean Fegan / NCC staff)

September 25 is World Rivers Day, a time to think about life-giving water 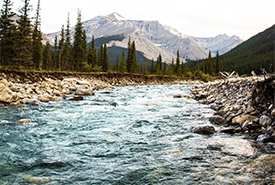 When many people think of the Nature Conservancy of Canada’s (NCC’s) work, they think of the protection of land (we are a land trust, after all). But by conserving natural landscapes, we are also helping to protect life-giving water for people and nature.

While this is true throughout Canada, perhaps nowhere is NCC’s conservation work more important than in the Eastern Slopes of the Rocky Mountains, where meltwater collects in mountain headwaters before flowing across the Canadian Prairies.

“About 90 per cent of the water that the people of the Prairie provinces rely on comes from the Eastern Slopes,” says Larry Simpson, NCC’s director of strategic philanthropy and conservation in Alberta.

“It’s quantity, it’s quality and it’s reliability are all really important to not only Albertans living on the edge of the Rockies, but everybody all the way over to Lake Winnipeg.”

Where water is born

Over the past 30 years, NCC has been conserving natural landscapes throughout the Eastern Slopes, by working with private landowners and partner organizations.

“These areas are precious not only for their aesthetic value and because they harbour the last big wild space where bears, wolves and cougars still exist. But perhaps the most valuable of all things is their role in filtering and providing resilient water sources for us,” says Larry.

Research on the relationship between land cover and water resources in the Eastern Slopes is ongoing. But efforts to conserve the region’s natural landscapes will likely prove to be more vital to maintain and protect its water into the future.

“In an era of increasing climate change, everything that we can do to maintain the health of the systems that retain water and slowly release it over the course of dry summers is going to be increasingly important,” Larry says.

From the Eastern Slopes, water is transmitted through the Canadian Prairies via the great river systems of the region, including the North and South Saskatchewan River Basins.

Along the way, these rivers provide some of the most productive habitats in the province, supporting a rich diversity of species, many of which are at risk. By some estimates, about 90 per cent of the at-risk species in the region spend all or part of their life in these ecosystems.

Streambank habitats, also known as riparian habitats, are some of the rarest in Alberta, as they exist only along rivers and streams. Besides providing excellent wildlife habitat, riparian habitats help prevent erosion, and they moderate the water’s temperatures.

NCC has been successful in conserving some riparian habitats in Alberta. For example, a new conservation property announced in August 2022 features more than 85 hectares of riparian habitat. Ensuring this habitat remains intact will help protect the water quality in the neighbouring creek, which supports populations of at-risk westslope cutthroat trout.

According to a 2019 report by the Alberta-based Miistakis institute that assessed the impact of land trusts in the province, most of Alberta’s riparian areas, the majority of which are on private land, remain unprotected.

The report found that within the Oldman River Watershed, where 60 per cent of riparian areas exist on private land, 7.5 per cent have been protected by land trusts. This is in comparison to the Bow River and Red Deer Watersheds, where only 2.5 per cent and 1 per cent, respectively, of private riparian areas have been protected by land trusts, including NCC.

This report shows that while there have been successes, there is much work still to do! If you would like to see Alberta’s headwaters and riparian areas better protected to help ensure a secure source of water for people and species into the future, consider donating to NCC today.