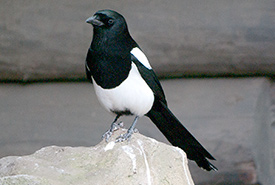 Magpie! Always waking up my wife and I…”

The lyrics to Ian Tyson's song “Magpie” tell the story of a fascinating and comical bird that swoops and glides across the open arid land, riding the dusty trails with as much an adventurous spirit as that of the cowboys of the old west. Primarily native to southwestern Manitoba and west to the southern Yukon, the black-billed magpie was once a denizen of the grassland thickets, sagebrush plains and foothills of the Rockies.

With the settlement of the west and extinction of large herds of bison, magpies retreated from the Prairies and settled in more cosmopolitan environments. If you live in western Canada, you have, in all likelihood, seen this bird in an urban area. In fact, magpies are so prolific in Edmonton that in 2019, the city dedicated a new park to this clever bird. Over the past five years, the magpie population increased by 20 per cent while other bird species showed a downward trend. Edmonton is officially the magpie capital of Canada.

A member of the crow family Corvidae, the magpie is a large, black and white North American bird with a long iridescent greenish black, wedge-shaped tail. Their presence is known by their raucous “queg, queg, queg” call or sometimes a persistent, nasal, querulous voice.

“Magpie! You old coyote in the sky…”

Historically, the bird has a bad reputation. According to Christianity, the magpie represents the devil because it sat on the cross of Jesus when He was crucified, and unlike the dove, did not catch the tears of Christ. And when Canada’s first settlers ventured into the Prairies, they often viewed the bird scavenging meat killed by other predators. Magpies would also follow and land on the backs of bison carrion, an important food source since bison carried ticks that the magpies would eat. In the badlands of southern Alberta, the magpie earned its reputation as the “bad boy” of the west because it would venture into the tents of cowboys and quickly escape with their food.

Today, magpies are seen as a nuisance because they often raid songbird nests, eating their eggs and chicks. Personally, I have had two annoying experiences with magpies. I have watched a magpie clean out the contents of my birdfeeder in a matter of minutes, resulting in more seed on the snow than in the bird’s two stomachs.

“Your choice of meat is something to eat,

I don’t have a problem with that…”

I have also left a barbeque unattended with a steak on the sidebar. When I left to get something inside the house, I returned to see a magpie flying off with my five-ounce tenderloin hanging from its bill. Now, that’s a problem! 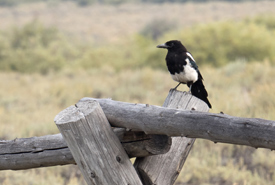 But in the scheme of things, magpies do have useful purposes. They practice the three Rs: reduce, relish and recycle.

They reduce. They are omnivores. They are intelligent eaters and scavengers. In the spring and summer, they are ravenous, consuming large amounts of insects, including ants, beetles, grasshoppers, tent caterpillars, and even fly maggots from cow dung and pet feces. In winter, they feed on service berries, seeds and grains.

They relish. As scavengers, they raid neighbourhood garbage cans, treating themselves on delightfully yummy food scraps.

They recycle. They are intelligent nest builders. The male collects twigs, sticks and plastic pieces to frame a domed nest, measuring up to 75 centimetres high and 50 centimetres wide, with a front and a back door. The female lines the nest with mud and grass. It is thought that a domed nest with two doors protects the adults and their six to nine chicks from larger raptors.

The magpie is symbolic of the spirit of Alberta and western Canada. While Ian Tyson ranches on the eastern slopes of the Canadian Rockies, he watches the mountains and prairie environments changing with more clusters of urban people constructing estate homes and fragmenting his rural past. The rancher and those that wrest a living out of the land know they have to adapt to a changing climate and land to survive. And so does the magpie.

You just want to be free,

Doug Madill is an Environmental Science grad from the University of Toronto, and holds Graduate Certificates in Human Resource Management, Marketing, and Petroleum and Mineral Resource Land Management. His career focus has included environmental planning, human resources management, tourism, and Indigenous training programs across four provinces. Now retired in Lethbridge, he continues to dedicate his time to volunteering in various organizations including the Nature Conservancy of Canada, Parkinson Association and Canadian Cancer Society.