Return to the trails: Hiking Waterton Lakes National Park after the Kenow wildfire 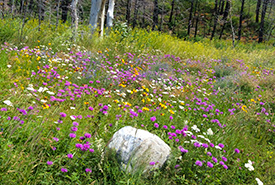 “Board up your windows, seal off the bottom of your deck and pray that the wind changes.”

Those were the last words of advice I heard from the firefighter in Waterton townsite as I and the rest of the worried cabin owners made final preparations before the mandatory evacuation and as the Kenow Mountain wildfire began to roar its way through the park. Thankfully, the wind did change, the firefighters performed miracles and the townsite was saved. Less so the park itself.

Today, Parks Canada continues to reopen many of the hiking trails that had been closed following the wildfire in the fall of 2017. The fire affected 19,303 hectares (47,699 acres) or almost 40 per cent of the park, including approximately 60 per cent of the trails that hikers have enjoyed for generations. For many, the return to favourite trails and viewpoints that have been dramatically altered by the intense wildfire is approached with regret and sadness. The loss of familiar trail experiences, sights, sounds and smells reminds us that life is constantly changing, often slowly, sometimes dramatically. Yet such change is a natural and dynamic process and the regeneration of the trails in Waterton offers a special opportunity to see first-hand how a mountain landscape responds to such an event.

The spring of 2018 saw the first regrowth of many plants that are adapted to fire and take advantage of bare soil and reduced tree canopy. Bright purple fireweed is typically the most noticeable and extensive plant to establish and provides a stunning contrast to the blackened tree trunks and otherwise bare slopes. 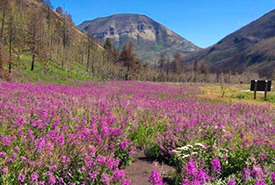 The typical view that returning hikers saw following Parks Canada’s partial re-opening of the trail network in 2019/20 was tree trunks were black, grey or white, resulting in a ghost-like landscape when viewed from afar. The near view of the trail margins and immediate surroundings, however, provided a story of stunning resilience and bright colours, with purple bergamot, brown-eyed Susan, yellow arnica and blue and purple asters being some of the most common to be seen.

Long known for its wildflowers, Waterton supports many plants and animals that are found only in this southwestern montane environment.

Already, many of the plants familiar to hikers in the park can again be seen on the re-opened trails. A common question on looking at the slopes from afar is “what’s growing there now?” or “when will the trees come back?”

The answer lies in forest succession, a concept where growth begins on burned over or cleared ground. It is then followed by recognizable stages of increasing vegetation diversity and growth of ground cover, understory, and finally shrub and tree growth forms. While early stages may initially proceed rapidly, subsequent stages of shrub and tree growth may take considerably longer. Full tree growth may take from 20 to 100 years, depending on the tree species and site or microclimate conditions.

Along many of the trails in Waterton, former mixed forests of lodgepole pine, subalpine fir, mountain maple and white spruce are beginning the early stages of succession with a variety of understory growth of alder, willow, low-bush cranberry, meadowsweet, thimble berry and cow parsnip. Today, this regrowth gives many of the slopes a patchwork green blanket beneath the otherwise standing or fallen dead tree trunks.

Elsewhere, the fire intensity has left little of the surface organic matter, seed or shoot material that would allow more rapid regrowth. For these slopes and portions of some trails, a much longer time period will be needed for the breakdown of woody material, organic matter build-up and plants to colonize once again. This process may well take longer in response to climate change, where growing seasons are altered in both extreme temperatures and moisture conditions. 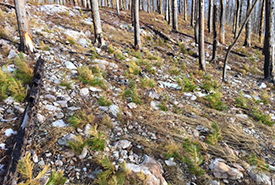 Seedlings growing after the Kenow wildfire (Photo by Dave Kerr)

Tree growth has, however, already begun for those species specifically adapted to fire. Lodgepole pine, whose cones typically require the heat from fire to open, can be seen on open slopes, often with large numbers of one- or two-year old seedlings growing together. This re-growth can lead to a dense, even-aged stand of pines, providing hiding cover for a variety of wildlife throughout the seasons.

Birds and animals too have started to return. Woodpeckers can be seen and heard hunting for wood-boring insect and beetle larvae in the trees, along with mountain bluebirds, northern flicker, chickadees and the ever-present squirrel and chipmunks eager to see the hikers return. While the trails may look very different from before the fire, there is still much to be seen as the cycle of forest growth begins anew.

For decades, the Nature Conservancy of Canada (NCC) has worked with private landowners to protect the area surrounding Waterton Lakes National Park, creating a natural buffer for the species that live in this area. To learn more about NCC properties you can access in this area, visit connect2nature.ca. For Waterton Lakes National Parks trail openings and conditions, please refer to the Parks Canada website.