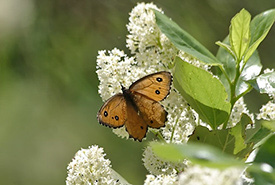 An exciting discovery has been made at Ghost Horse Hills, which is a property north of Edmonton that the Nature Conservancy of Canada (NCC) manages. A species of butterfly that had never been seen in this area before was found by Riley Brown, a Grade 5 student from Morinville Public School, during an outdoor education class trip.

Riley and his class went to Ghost Horse Hills, which is near the Halfmoon Lake Provincial Natural Area, to conduct a butterfly biodiversity survey with NCC and the Sturgeon Outdoor Classroom. Biodiversity surveys are a way of determining what species are in an area, and how many of them are there. This is an important conservation tool because changes in population and diversity can be reflective of the quality of the area’s habitat.

The Sturgeon Outdoor Classroom is an education program where teachers take their classes into nature. Mrs. Barr, Riley’s teacher, wanted to get her class outdoors for a social studies unit called “Caring for Canada.”

The class trip in early June 5 started off with a butterfly survey and a hike up to the top of the hill, which is where Riley found the butterfly. After the hike, the class learned how to identify trees using a visual guide called a dichotomous key and learned about the Indigenous culture and history of the area.

Mrs. Barr’s students were taught how to tell the difference between a moth and a butterfly, which can be done by looking at the antennae and wing shape. Moths and butterflies are insects, and a part of the group known as lepidoptera. After these insects were caught by the students, the butterflies and moths were put in a large glass container where the experts, Loney Dickson and David Lawrie, could identify them.

The expert recognized that the butterfly that Riley found was something special right away. The species Riley found is called the Macoun’s Arctic (Oeneis macounii), and it had never been recorded as seen in that area before! 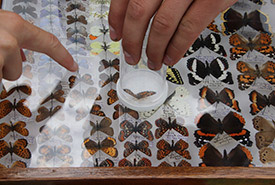 It is always exciting when a new species is found, and finding new insects is especially great because butterflies, like most insects, are very sensitive animals. When there are changes in their environment and their habitat, insects are usually the first animals to disappear, and it takes a long time before they return to an area after changes happen. As they are small and delicate, when there’s a change, it impacts insects first.

Finding this butterfly at Ghost Horse Hills is more than a fun find. A new species of butterfly being found here means that the land in that area is healthy can support many insects. Since insects play a number of important roles, such as pollinating flowers, helping decompose dead matter, and being a food source for many animals, having lots of insects means that area is thriving. NCC works to ensure that our conservation actions will make a difference, and a seeing lots of insects is a great sign!

Riley was so excited when he found out that his find was he was the first person recorded to find this species at Ghost Horse Hills. The butterfly species was recorded in NCC’s biodiversity survey database, and an official certificate of discovery was given to Riley.

Riley normally likes to catch minnows at the lake when he goes fishing with his dad and brother, and we can’t wait to see what he finds next.