A wildlife experience worth an early rise 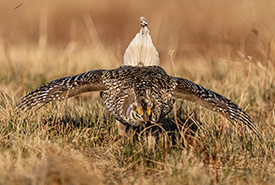 Surveying wildlife takes planning, patience and, often, waking up at a painfully early hour, but it also rewards with inspiring experiences that last a lifetime.

Leta Pezderic, the Nature Conservancy of Canada’s (NCC’s) Alberta grassland stewardship manager, had one such experience this spring surveying sharp-tailed grouse at a native grassland site in southern Alberta.

Each spring, these chicken-like birds engage in a unique mating behavior, known as lekking. At sites known as leks — often located on hilltops with short grass — sharp-tailed grouse congregate before dawn. As the sun rises, males start a dance-like courtship display, as onlooking females assess their performance and mate with those they find most impressive.

Leta was not alone during her survey. She was accompanied by the property’s landowner, who recalls seeing the birds dancing from afar in the past while they moved cattle but admits that he never took the opportunity to stop and watch these grouse in all their glory. Ranching is a busy lifestyle with many responsibilities, after all.

Surveying birds often requires an early morning wakeup, but even more so for sharp-tailed grouse — as the goal is to reach the site an hour before sunrise, around when the birds start their dance.

After meeting, Leta and the landowner successfully reached the lek site an hour before dawn.

Even before the birds started their dance, just being on the open prairie before the break of dawn light was a unique experience, says Leta.

“There are literally no buildings and no other human presence,” says Leta. “It’s like going back in time.”

Once the party started, one of the most surprising things was not the sight of the birds, but their sounds, says Leta.

“I wasn’t expecting the vocalizations we heard,” says Leta. “I don’t know how to describe it, other than it took my breath away.”

A photographer, Leta also captured thousands of images of the birds and their interactions. That morning was memorable for both onlookers.

“Just to take a moment and listen and watch the dance, without them even knowing we were there, was really special,” says Leta. “The landowner too said it was an experience he will remember it forever.”

There are incredible natural events always happening around us. Experiencing them shows why conservation matters.

“Taking these moments, getting out into nature, reminds us of what all this hard work is going toward,” says Leta. “That is what it is all about.”

Alberta’s sharp-tailed grouse are not listed as at-risk either provincially or federally. However, they are considered sensitive, partly because farming intensification has reduced their habitat availability.

Sharp-tailed grouse often return year after year to lek sites, meaning documenting and protecting these locations is essential to their conservation.

“This wildlife species is losing the areas where they can do this dance — they’re disappearing,” she says. “That’s why protecting these wide-open spaces means so much.” 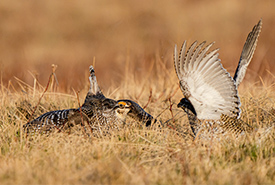 While Alberta’s mountain species — such as grizzly bears, bighorn sheep and mountain goats — get much attention, prairie grasslands species, such as sharp-tailed grouse, are just as incredible but often get overlooked.

“Prairie species are often more subtle,” says Leta. “They are just as exciting as mountain species, but many people do not get a chance to observe them.”

That’s likely because what is left of Alberta’s grasslands can be hard to find.

“So much of our grasslands have been converted; many often think the norm are the wheat and canola fields we see from the highway, whizzing by, not paying close attention,” says Leta. “You don’t typically find a lot of those true, native prairie grasslands unless you go off the beaten path, and once you do, it still may look boring at first to the untrained eye.”

But if you stop and take a moment to immerse yourself into a native grassland ecosystem it can be an incredible — and memorable — sensory experience.

“Suddenly you will start hearing the songbirds singing, the amphibians croaking and the play of the grass, and smelling the sage or mint as you walk,” says Leta. “All your senses come alive.”

Accelerating the conservation of what remains

While prairie grassland species are as incredible as they are diverse, many are declining as grassland ecosystems are converted, subdivided and degraded.

“Of all our species at risk, 75 to 85 per cent are found in our grasslands, and that is because their habitat is disappearing,” says Leta. “The threat is so imminent; we don’t have time to waste.”

But we could not achieve this without our supporters. To help conserve Alberta’s grasslands, consider donating to NCC today.

All photos in this story were captured by Leta Pezderic.