Spend a day in Alberta’s Badlands 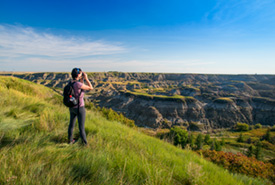 Jackie Bastianon was the Nature Conservancy of Canada’s (NCC’s) 2018 communications intern for the Alberta Region. She is currently studying journalism at Carleton University in Ottawa and hopes to use her writing skills to compel people to care about the environment as much as she does.

Often when people outside of the province think of Alberta, a few things come to mind: oil, cowboys and cattle.

What people forget is that Alberta's physical and cultural landscape is made up of much more than these common stereotypes. The north of the province is home to the largest boreal forest protected area in the world, while the Rocky Mountain range spans the southwestern border of the province. To the south, there are the fragile but ecologically important grasslands and the Cypress Hills (which are actually the highest point of land between the Rocky Mountains and Labrador).

In central Alberta, the Badlands are a familiar vista for Albertans and favourite destination for many tourists.

If you wish to experience Alberta’s iconic Badlands, NCC’s Nodwell property is the perfect opportunity. This Nature Destination is part of a network of conservation sites across the country that are open for public use. Located just outside of the town of Drumheller on Horseshoe Canyon, this site is easily accessed from the city of Calgary. During this one-hour drive, you'll travel through wide, rolling prairies before approaching a sign on the highway that directs you to Horseshoe Canyon, one of the best-known sites in the Canadian Badlands.

As you walk through this area, the fauna and flora around changes from grass to sandy stone and bare vegetation. The trails on the Nodwell property begin at the top of the canyon, wandering through the prairies before dropping into the canyon bottom. The geological layers of Horseshoe Canyon were laid during the Cretaceous period some 70 million years ago, when dinosaurs roamed the lush forests and swamps of the region. These layers can now be seen on the exposed walls of Horseshoe Canyon.

You'll be awed by the breathtaking scenery, but if you want to look a little closer, here are some things you should look out for during your next trip to the Badlands. 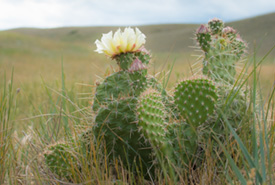 This segmented cactus can be easily identified by its flat, oval-shaped cladodes (pads) covered with thin spikes. It tends to thrive in areas with long, hot summers with little rain and low humidity.

Prickly pear cactus is native to the Americas and can also be found across the western United States and Mexico.

This cactus is indeed prickly, so if you happen to come across it be sure to leave it alone or risk being poked! 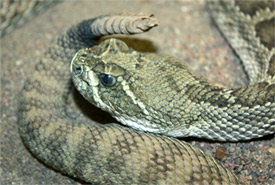 Rattlesnakes can be found south of the province, in the grasslands and in the Badlands. They are active during the warmer months of April to October and come out to sunbathe on clear days.

These rattlesnakes have heart-shaped heads and range between 0.8 metres and 1.4 metres in length. They are a yellowish brown and have dark brown spots covering the length of their body to help camouflage with their surroundings.

You will likely hear them before you see them, so if you hear a rattling noise, stop, look around and walk in the opposite direction. 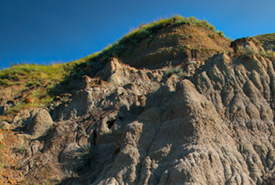 The hoodoos are one of the main attractions around the Alberta Badlands, but what are they exactly? A hoodoo is a long vertical pillar or rock, often with a mushroom-like top, that is formed in Badlands ecosystems.

These natural structures are prone to erosion and shift around a centimeter per year.

The ones found in Alberta are made up of sand and clay deposited 70 to 75 million years ago during the Crustaceous period. 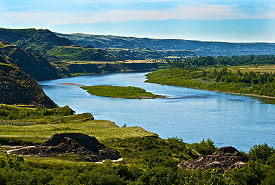 When you're driving or walking around the Drumheller area, you'll almost certainly spot the Red Deer River.

This river is 724 kilometres long and runs through several communities in Alberta, including Red Deer and Drumheller, where it flows in a southeast direction.

It was the Red River Basin that was eroded out nearly 18,000 years ago during a glacial flood that formed most or a large portion of the Alberta Badlands area. 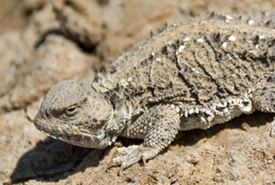 This little lizard is native to the Alberta grasslands and is easily recognizable by the short horns located on the top of its round head.

It thrives in the rocky areas of warm, semi-arid climates like the Badlands and the coolies.

You'll have to keep your eyes peeled for them, though. The short-horned lizard has been listed as endangered under the federal Species at Risk Act since 2007, so this creature is rare to spot! 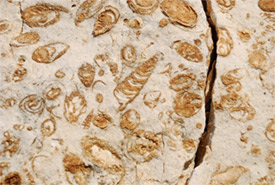 Dinosaur National Park is situated within the Badlands, and this area is a world-famous digging site for fossils.

Over the last few decades, thousands of fossils have been found in this area, and many more remain undiscovered.

During your visit you might get lucky and be the first to find something entirely new! 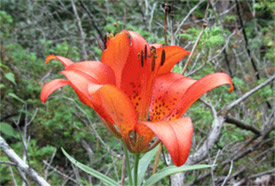 This beautiful, bright orange flower will be sure to catch your eye as you explore the Badlands.

The wood lily takes five to seven years to produce a flower, but when it does it is well worth the wait. It blooms throughout June and July, and can be found in the prairies and foothills across Alberta.

Remember never to pick wood lily; it is very fragile and doing so will kill the entire plant.