Sure signs of swift fox recovery in Alberta 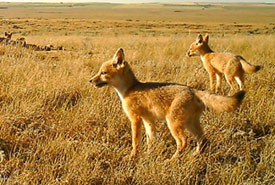 Inspiring news of the recovery of swift fox in Alberta continues, as recent surveys on a Nature Conservancy of Canada (NCC) property in southeastern Alberta found ample evidence of the presence of the threatened canine species, which was once lost from the province.

Last year, NCC reported the discovery of a swift fox den on a property that was inhabited by at least five individuals. This finding was heralded as a sign that efforts to recover the species in Canada have been successful in re-establishing a swift fox population in Alberta.

These foxes are descendants of a captive breeding program started by the Cochrane Ecological Institute in the 1970s. The program aimed to reintroduce swift foxes to parts of southeast Alberta and southwest Saskatchewan.

Thanks to initiatives by conservation groups, including NCC, to protect or restore native grasslands in these, the released foxes had a home in which to thrive.

It’s been a long voyage to recovery. But these findings are signs of swift fox recovery.

Surveys were conducted by Bear Tracks Environmental Ltd. biologists during the winter of 2018-19 to further study the swift foxes found on an NCC property in southeastern Alberta.

As swift foxes typically are inactive during the day and often reside underground, they can be difficult to observe directly. As a result, biologists assessed their presence at the property via a winter snow-tracking survey in December 2018. The area was scanned for indirect signs of swift fox activity, such as tracks and burrows.

Four trail cameras were also installed between December 2018 and January 2019 to detect whether swift foxes were living on the property. The cameras were set up where the species was most likely to be encountered (either in areas of high mammal activity, or near burrows).

The surveys yielded more encouraging evidence of the recovery of the species.

Abundant signs of swift fox activity were documented during the tracking survey, including three confirmed burrows, three possible burrows, a prey site and 10 areas where swift fox tracks were observed. Biologists were unable to determine whether the confirmed burrows represent active den sites, or whether the foxes entered them temporarily while hunting for prey. 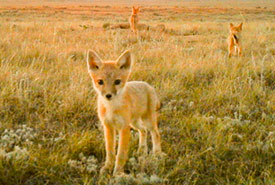 Additionally, images of swift fox were recorded by two of the cameras deployed at the property.

Between the trail camera photographs and tracking survey results, 75 per cent of the survey sites contained evidence of swift foxes.

These results show that the species remains active and is using habitats throughout the area. The dedicated, evidence-based work by groups such as the Calgary Zoo, Cochrane Ecological Institute and NCC to help the species seems to be paying off.

Swift foxes are not the only species benefiting from conservation efforts at the property, as over 50 species of birds and other wildlife have been recorded there, including 15 species at risk.

One of the most abundant bird species on the property currently is Sprague’s pipit, a threatened grassland songbird. Its presence is an indicator of healthy range management.

Other sensitive or at-risk species previously documented at the property include chestnut-collared longspur, McCown’s longspur and pronghorn.