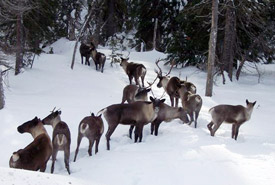 Molly Dube was the 2019 communications intern for the Nature Conservancy of Canada’s (NCC’s) Alberta Region. She is currently studying natural resource conservation at the University of British Columbia in Vancouver. Molly is passionate about Canadian conservation and environmental protection. Her goal is to communicate conservation information in a way that will get people excited, inspired to learn more and take action.

Caribou have always played a part in Canada’s culture and history. They’re the face of our 25-cent coin, they are crucial to the survival of northern Indigenous communities as a food source, and now the species is considered at risk in Alberta and across Canada.

The Nature Conservancy of Canada (NCC) is actively involved in protecting Canada’s boreal forests, which provide habitat for two-thirds of our country’s plants and animals. This includes caribou as well as other endangered and threatened species.

Many wildlife biologists study caribou to learn the challenges that these animals face. A good friend of mine, Erin Tattersall, is a recently graduated master’s student in wildlife biology. When I began working at NCC and learning more about the role NCC has played to protect boreal habitat, I decided to reach out to Erin and learn more about her research on these iconic creatures.

Erin has spent the last few years studying a species of caribou found in northern Alberta known as woodland caribou. This species is highly at risk of going extinct, as the herd numbers have been getting smaller and smaller.

To understand why woodland caribou are disappearing, we have to look at ecology. Each ecosystem is unique, which is why there is no “one size fits all” approach to protecting a species. Ecosystems are often described as a web, where animals, plants, water and humans are pieces that connect and interact with one another.

To protect one species, like the woodland caribou, this web has to be untangled. When you’re looking at dozens of animal species, changing climate and increased resource extraction, untangling a web that complicated is no easy task.

Erin is no stranger to complex relationships. As a part of a family that both loves the outdoors and works in the mining industry, their relationship to the land is complicated and something she grew up thinking about often.

That interest in the relationship between humans, animals and the land took her to stunning landscapes in northern Alberta for her research. Erin studies the impact that linear disturbances, such seismic lines or trails from oil and gas exploration, have on caribou.

Connecting habitat is an aspect of land conservation that is especially important for large animals that move over great distances, like caribou.

“There needs to be a corridor or connection to safely move through the landscape. When habitats are broken up, it breaks that connectivity,” Erin says.

This can often leave woodland caribou, who normally escape predators by moving away into safer areas, with very few options.

Protecting the boreal is key in protecting caribou. Stopping habitat loss is the key to saving Canada’s endangered species, and caribou are no exception.  “There are very good measures out there that are helping caribou, but ultimately we need land protection.”

This is something that NCC is working to achieve. In 2018, NCC, in partnership with Tallcree Tribal Government, the Province of Alberta and Syncrude Canada Ltd., was involved in the creation of the Birch River Wildland Park in northeast Alberta. When added to other contiguous conserved lands in the area, it is now part of the largest stretch of protected boreal forest on the planet.

“This is bigger than protecting just caribou,” Erin explains. “What’s special about caribou is that when you protect their habitat, you are also protecting and maintaining connections between habitat areas for a lot of other species too.”

Erin has previously written about caribou conservation issues in her local community, and she is passionate about sharing what she’s learned about the endangered woodland caribou and raising awareness. Protecting the land and habitat for caribou is key to making sure that Canada will continue to be home to this iconic animal.