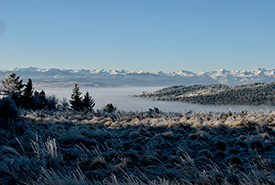 In the late 1960s, Mike and Sylvia Simpson made the decision to move their family out of Calgary and into the country. They moved into the foothills by the town of Cochrane, and the following decade they purchased 69 hectares (170 acres) farther west, in the Wildcat Hills.

“We consciously decided to move our family, specifically to get them closer to nature and also to shelter them from the materialistic world in the city,” said Mike. “That has worked extremely well; the whole family is nature lovers.”

The Simpson family now consists of Mike and Sylvia, their five children, 10 grandchildren and one great-grandchild. Over the years, much of the family has lived on their haven of nature in the Wildcat Hills, but today only Mike and Sylvia remain on that land.

This area is important; not just for the Simpson family that lives here, but also for the wildlife. The forests, grasslands and wetlands on this property provide habitat for a variety of animals, including elk, mule and white-tailed deer, moose, bear, cougar, fox and a full variety of birds. Golden eagle, great blue heron, bald eagle and tiger salamander have also been spotted here.

“We have a really great diversity of wild animals that we’ve seen increase over the years due to the pressures of human development to the west of us and because they have nowhere to go to the east. This property is a small safe haven for a lot of animals,” said Mike. 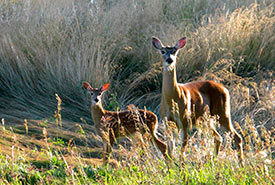 Mike’s passion for conservation was born from working in environmental land use planning. His work took him through Alberta and the Yukon, learning about the impacts of land use on the environment, and it was this experience that encouraged him to eventually put protections in place on his own property.

“This place is special,” said Mike, “because it’s never been developed in any way. There was some minor cattle grazing before we were here. And in the 1880s, some of the Douglas fir trees were cut for the railroad and some large stumps remain, but there was never anything but that little bit of selective horse logging for railway ties. It is pristine piece of property.”

As for the future, Mike knows that he and Sylvia will need to move eventually.

“The family has left, all married and gone, and now it’s just the two of us out here. We’re going to have to leave in the next few years,” he said

Mike hopes that when the time comes, the next landowners will continue to care for and appreciate this land the same way he and his family have. And with an easement in place, he knows that nobody will be able to develop his land and destroy the slice of heaven he and his wife have conserved.

Mike knows that “if people can actually buy some land and use it to nurture and educate their families, to get them into the same mindset of conserving and enjoying nature, than that’s one of the biggest benefits to having an easement on our land.”