Through the fire and flames 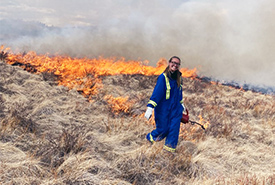 As dangerous as it is vital, under careful expertise, fire has the power to breathe new life into threatened prairie landscapes.

Fire is an important ecological process throughout grassland ecosystems. As a natural disturbance on the landscape, native plants and animals within these habitats have co-evolved to rely on fire.

Prior to colonization, Indigenous people across the prairie’s use of fire was extensive and frequent across the region; it was recognized as a beneficial tool for the maintenance of prairie species, many of which were harvested for food and other resources, says Rick Arthur, fire expert.

“As many species adapted to the frequent use of fire by Indigenous people over thousands of years, those same species are impacted by fire exclusion,” says Rick. “We need to recognize that the landscapes we see today are not what existed historically and may not be sustainable for the future.”

It is only within the last couple of centuries that fire has become largely absent from these landscapes. As Indigenous communities were removed and excluded from their land, the region was converted largely to agriculture, industry and settlements where fire was unwanted.

Nature Conservancy of Canada (NCC) stewardship manager Leta Pezderic notes that the suppression of fire has had devastating effects on what are already the most ecologically threatened ecosystems in Canada, as woody and forest species have been able to encroach on the few remaining intact grasslands. 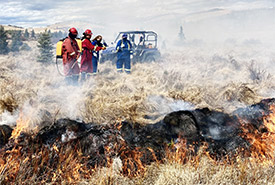 “Aspen is a native tree to the area, and so are a lot of the shrubs being controlled…so, why do we care that these native trees are growing in the area?” says Leta. “With the suppression of natural fire occurrence happening, we’ve allowed these native trees to come in, and they’re displacing the native fescue or native grasslands that are so important. It’s changing how those ecosystems are functioning.”

In the Bow Region of Alberta, Carter Siebens, owner of Tongue Creek Ranch, and ranch manager Tom Fenwick, sought out Rick’s help to complete a vegetative management plan on the property, which includes prescribed burns to deal with the encroachment of woody plants.

“Prescribed fires are quite different than a wildfire, because its obviously controlled — it’s burning at a much cooler temperature than a wildfire would,” says Kate. “Wildfires get into that organic layer of soil and basically destroy everything because they’re burning so hot, but these fires are more designed just to take down the shrubs and grasses to ground level and then the fire is extinguished. So, it's just quite helpful for the vegetation.

With safety as the number one concern, controlled burns can only be completed under certain weather and fuel (dried vegetation) conditions, and with adequate resources on hand to contain and control the fire. Everyone involved also wore protective equipment. The entire process is cautious, calculated and methodical says Kate.

“They burn the perimeter first and secure a few metres that they call the “black area,” then they burn up [building in strips] toward the black area,” Kate says. “They have water tanks and fire crews on site at the same time, wetting down the dry grass around the area, and they use all kinds of different tools along the perimeter to put out the fire and make sure things like dried cow patties are not left smoldering.”

Over two days in early May, NCC, CCI Wildfire Services, the Piikani Nation and Eden Valley Fire Departments, and Dinyar Minocher of the Canadian Prairies Prescribed Fire Exchange, along with family, friends and neighbours, all came out to help with the 18-hectare prescribed burn on Tongue Creek Ranch. 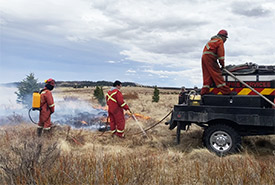 Fire services assist with the prescribed burn (Photo by NCC)

Looking toward the future, it is the hope of many involved, including Rick, that the results of this prescribed burn will be a success, resulting in greater uptake of the practice in the surrounding areas.

“To maintain these healthy vibrant ecosystems, we need to understand the historic disturbance patterns that created them, in this case in the grasslands it was frequent fire as well as bison herbivory,” says Rick. “If we are to restore them, we need to use every tool available and perhaps develop more. We need to develop more expertise and capacity because this is an issue that goes right across our foothill regions.”

If you would like to support NCC’s work stewarding natural landscapes, consider donating today.