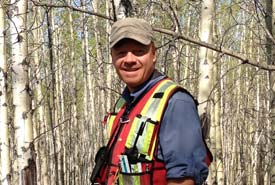 How did you come to join the Nature Conservancy of Canada (NCC)?

I became interested in pursuing a career in wildlife shortly after high school in Golden, BC, and have lived and worked as a biologist in the region since. One of my first wildlife-related jobs was as a student biologist with the Columbia Basin Fish and Wildlife Compensation Program. There, I became exposed to a wide variety of ecological-based projects throughout the Columbia Basin.

Since that first job it seems like my life and career have continued to be focused on wildlife and habitat issues throughout southeastern BC. When I heard that a position was available to work in the region on a job where I could bring together all my previous work and educational experience, I applied for the position with NCC. I started in 2014 as a stewardship coordinator and then became the Canadian Rockies program director in 2017.

What is your educational background and previous experience?

I worked as a student biologist for the Columbia Basin Fish and Wildlife Compensation Program while obtaining my BSc in biology (wildlife) at the University of Northern British Columbia in Prince George. I recently completed my MSc in environmental science (Thompson Rivers University, Kamloops) on road ecology and highway mitigation design for badgers in south-central British Columbia.

In between attending school, I have worked as a contract wildlife biologist throughout British Columbia, Alberta and Ontario (since 2001). I have since gained extensive experience surveying and handling small- and medium-sized wildlife for research and inventory projects, including northern goshawk, fisher, wolverine and badger. Additionally, I have contributed to habitat and ecosystem restoration, wildlife inventory and species at risk surveys.

What are you hoping to achieve through your work at NCC?

To continue working to promote the conservation of the spectacular variety of wildlife and their habitats in British Columbia.

Describe a typical day at work.

My days involve a mix of juggling day-to-day activities on NCC properties and working with landowners who have conservation agreements in place on their properties, writing funding proposals, catching up with the extensive information needed to do this job well and conducting site visits for all NCC lands throughout the Canadian Rockies program area.

What are your hobbies/interests outside work?