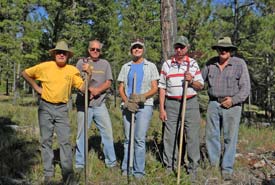 Rick Hoar is a familiar face around the Nature Conservancy of Canada's (NCC's) Canadian Rockies office in Invermere. As the president of the Lake Windermere Rod and Gun Club, Rick has rallied a group of volunteers from the club to help out with a number of NCC stewardship projects, including assisting with prescribed burns on the Kootenay River Ranch and setting up nest boxes for migratory birds on a number of NCC conservation areas in the Columbia Valley in BC's East Kootenay region.

“The Snag Crew carried out its first work in 2013 when five of us raked woody material from around snags on the Kootenay River Ranch prior to an intended controlled burn,” recalls Rick. “There are only a few snags still standing and NCC did not want to see them catch fire.”

Having worked as a Conservation Officer for more than 30 years, Rick brings a wealth of experience to our work in the field. Now retired, he continues to be a conservation leader in the Lake Windermere Rod and Gun Club.

“I might have retired from the job, but my desire to stay committed doesn't retire. The Rod and Gun Club is a great avenue to be involved. My involvement [with NCC] is a result of playing a leadership role in the club as well having a membership who wants to be involved. Both the personal desire and the group catalyze to carry out the work.”

Rick is always looking for new ways to contribute to NCC and is excited to lend his hand to future restoration projects in the Columbia Valley.

“It is easy to get caught up in great causes or big projects, but the small ones are just as important,” Rick says.

The whole NCC team, and the Canadian Rockies crew in particular, would like to thank Rick and the Lake Windermere Rod and Gun Club for all their hard work. We look forward to continuing this great partnership for years to come.