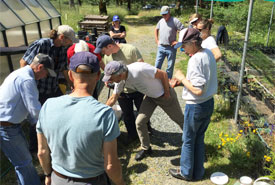 On many Nature Conservancy of Canada (NCC) sites across the province, conservation volunteers play an important role in stewardship and restoration efforts, but at the Cowichan Garry Oak Preserve (CGOP) on Vancouver Island, the situation is unique: a dedicated group of “regulars” come out to the preserve almost every week. Some have been visiting this property, NCC's flagship project in the Cowichan Valley, for over a decade. 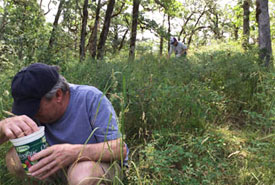 NCC acquired the first part of CGOP in 1999, then the rest in 2001. There have always been lots of Conservation Volunteers events on the preserve, with volunteers making a significant contribution to the restoration of important Garry oak habitat.

Diane Rutledge has been volunteering since the very beginning, after moving to the Cowichan Valley in the mid-90s. Diane remembers the Scotch broom that was choking the area's native plants when NCC first came on board:

“You couldn't reach the top [of the broom]. It was like trees,” she recalls.

Now, NCC has a strategy to keep the invasive broom at bay: severing the roots at soil level prevents the plant from expanding. 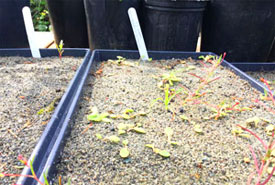 Recently volunteers undertook the challenging extraction of yellow sand-verbena seeds from their pods. The pods had been collected from James Island, a private Gulf Island near Sidney, BC where NCC holds conservation agreements on the island's fragile sand spits.

It was slow work — maybe one seed a minute — but to volunteer Warren Walters, “it's gratifying to see they're surviving.”

The seeds will be started in the native plant nursery before being replanted back on James Island. It may seem a lot of effort for one perennial flower, but yellow sand-verbena is the exclusive host to an endangered species of moth.

Paul Gowland has volunteered on James Island as well as CGOP and Chase Woods, just down the road from CGOP, for 11 years. He prefers larger tasks like pulling invasive species and repairing structures over delicate jobs like seed harvesting, but the work always varies throughout the seasons and from week to week. Paul has come to know the fellow volunteers as well as the land, and says volunteering is as much about seeing people as about the work itself.

The sentiment is echoed by Irvin Banman, who has served as the Cowichan Garry Oak Preserve's site manager since 2001:

"We've become quite a close team and almost like a family,” says Irvin of himself and the volunteers.

Watch an interview with Irvin to learn more about volunteering at Weedy Wednesday.

Irvin adds that in the last few years, one of the most important things he's learned about is indigenous land management. CGOP sits within the traditional territory of the Cowichan Tribes, who historically managed the land with fire and cultivation. Without fire to control the growth of trees and shrubs, Garry oak habitat will quickly morph from open meadow into a Douglas-fir forest. 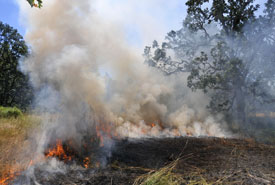 With the cooperation of local fire authorities, NCC has again started to implement controlled burns on the preserve. The burns encourage new growth of native plants and regulate invasive ones. It's another step towards a healthy, productive Garry oak ecosystem. Volunteers have helped with the burns directly and with documenting these exciting events in images.

Each volunteer brings a different background, unique skills and diverse areas of interest. Roger Wiles, who has been helping at CGOP for five years, is concerned about the environment and feels volunteering is a hands-on way to help. Many volunteers have their own gardens as well and just want to spend more time outdoors. 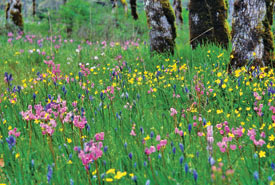 The care these volunteers have for CGOP has made an impact on the preserve, and these are just some of the volunteers who contribute significantly to the stewardship of this area. The Weedy Wednesday volunteers show that when citizens care for the natural places in their community, they can really make a difference, and work towards protecting the Earth for its natural values.

New volunteers are welcome to join the Weedy Wednesday events at CGOP. To find out more and to register, visit our Conservation Volunteers events listing.