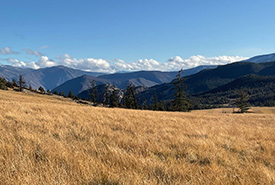 It is here, above the west side of the Fraser River, that the Talking Mountain Ranch Conservation Area can be found. 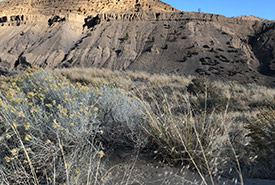 Some of the driest grasslands in BC are found toward the northern end of the conservation area. The sandy soils there give rise to the rare, red-listed big sagebrush needle-and-thread grass ecosystem and the sensitive big sagebrush bluebunch wheatgrass ecosystems. The grassland ecosystems here, in conjunction with public lands, are connected to the nearby provincial protected areas of French Bar Provincial Park and Churn Creek Protected Area. Together, this landscape provides wildlife corridors for bighorn sheep and migratory bird species, such as Lewis’ woodpecker. Parts of the northern portion of the conservation area foster Fraser River valley bottom grasslands that also support species at risk, such as gopher snake, western rattlesnake and American badger.

At the southern end, higher elevations give rise to a wetter environment that supports Douglas-fir, Engelmann spruce and black cottonwood forests. Classified as an ungulate winter range by wildlife biologists, the forests at this end provide valuable winter habitat for mule deer. Ward Creek intersects this portion of the conservation area, where beavers have created multiple pools along the creek. These riparian areas — the green, vegetated zones around creeks and wetlands — provide habitat to many migratory bird species.