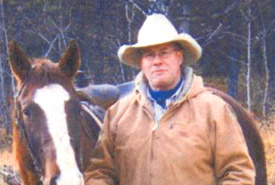 Thunder Hill Ranch is a large, operational ranch in the Upper Columbia Valley, on the shores of Columbia Lake. In 2004, Thunder Hill Ranch became the Nature Conservancy of Canada's (NCC's) first ranching-conservation partnership project in British Columbia. It laid the foundation for some of NCC's largest and most exciting grassland conservation initiatives in the province.

Located in the ecologically important Columbia Valley, Thunder Hill Ranch contains many of the key natural features that make this area such a hot spot for conservation activity. The landscape of the ranch ranges from open Douglas-fir/ponderosa pine forests to grasslands of bluebunch wheatgrass, junegrass and fescues, to wetland areas of shallow ponds and small streams.

Wildlife is plentiful on Thunder Hill Ranch. The area provides critical winter range for elk, deer and bighorn sheep. Badgers, a federally endangered species, are found on the property. Other at-risk species, such as Lewis's woodpecker, are also found here. Numerous wide-ranging animals, such as grizzly and black bear, cougar and wolf, travel across the property.

Thunder Hill Ranch now forms part of a large connected area of conservation lands that spans more than 30 km2 around Columbia Lake. This connectivity is crucial to providing safe passage to large mammals as they move between mountain ranges. It also helps to compensate for the disturbance from road and residential development in the area.