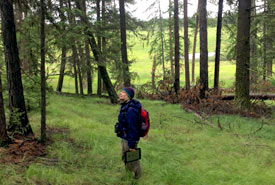 In July 2003, The Land Conservancy (TLC) received a donation of a 59-acre (24-hectare) site near Osoyoos. The gift, made under the Federal Eco-Gifts Program, has helped protect a significant stand of old-growth western larches, including what is believed to be the second largest western larch tree in British Columbia. In 2015, the Lehmann Springs Conservation Area was part of a 26-property transfer from TLC to the Nature Conservancy of Canada (NCC).

Up on the highland plateau east of Osoyoos, Highway 3 winds its way through the small villages of Bridesville and Rock Creek as it heads towards Grand Forks and Castlegar.  This area, known as the Boundary Country, has a rich history of cattle ranching, gold mining and forestry. On the eastern edge of Boundary Country, approximately 20 minutes from Osoyoos, Dale Lehmann and his wife Anita are the second generation of Lehmanns to ranch their land. Adjacent to what was Dale and Anita’s ranch house is a special stand of trees that Dale affectionately refers to as “the bush.”  However, this forest is anything but a bush.

The forest, which is now known as the Lehmann Springs Conservation Area, is an ecological treasure in many ways. The large, old-growth western larches are over 600 years old, and the largest of these trees is 170 feel tall. These larches provide nesting habitat for the provincially blue-listed (vulnerable) Williamson’s sapsucker.  The forest also includes ponderosa pine, spruce and interior Douglas fir trees along with a high density of large and small snags.

This forest is home to a variety of other wildlife, including red tail hawk, pileated woodpecker, flicker, owl and deer (to name a few). There have also been unconfirmed sightings of the nationally endangered white-headed woodpecker. Another unique feature of this forest is the abundance of natural springs. There are at least nine natural springs within this forest, where water can be seen bubbling up from the ground. These springs are home to tiny freshwater shrimp, and in the summer, are the headwaters for Nine Mile Creek, which flows into Osoyoos Lake on the U.S. side of the border).