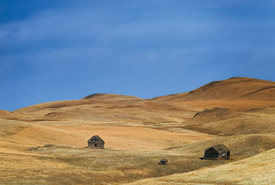 The Heritage Grasslands natural area is characterized by wide valleys, large lakes and rolling plateaus. In the centre of southern British Columbia, the area encompasses grassland valleys of the Nicola River and parts of the Thompson River. This natural area lies between mountain ranges: the Coast and Cascades to the west and the Columbia mountains to the east. Glacially-formed moraines and lake deposits are left over from the last Pleistocene ice age.

As the name suggests, grassland ecosystems span much of the area. With grasslands covering less than one percent of British Columbia, it's no surprise these semi-arid habitats support many species-at-risk. Sharp-tailed grouse, American badger and long-billed curlew find refuge here. Species like mule deer and bighorn sheep also roam the valleys and coniferous forests. Bunchgrasses and shrubs are adapted to the hot, dry climate in summer. Droughts are common, and much of the area's precipitation comes in the form of snow during the cold winters.

Heritage Grasslands natural area is within the traditional territories of the Tk’emlúps te Secwepemc.

Like many regions across BC, development poses the primary threat to this natural area. Valley-bottoms are the most sensitive to disturbance, and rising real estate values are increasing pressure on the biodiversity found here.

As European settlement began to increase in the mid-1800s, agricultural and residential development also grew.

The Nature Conservancy of Canada has had a presence in Heritage Grasslands since 2008, and has implemented projects to restore grassland and riparian ecosystems. 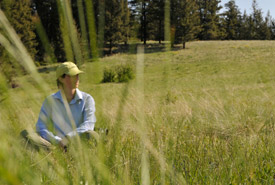 Lac du Bois is a popular spot near Kamloops for hiking and fishing. NCC's conservation lands are located within and adjacent to Lac du Bois Grasslands Protected Area. Learn more>

Thanks to the conservation-minded Jackson family who ranched these lands for many years, cattle and wildlife co-exist on this linkage between other conservation areas. Learn more> 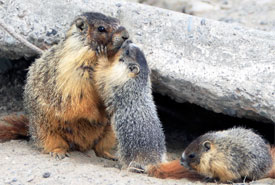 Located on the outskirts of Kamloops, these bluffs are a favourite spot for local citizens and naturalists, who come to view bats, birds, bighorn sheep and marmots. Learn more>

The covenant on this active ranch was donated to NCC by Connie Philip in honour of her late husband, Warner. Learn more>