Western bluebird at the Cowichan Garry Oak Preserve, BC (Photo by Ryan Hetschko)

Bringing back the bluebirds 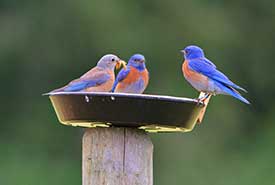 Western bluebirds at a feeder (Photo by Ryan Hetschko)

Love is in the air at the Nature Conservancy of Canada's (NCC's) Cowichan Garry Oak Preserve in Duncan. Spring marks the time of year when we start to watch for evidence of western bluebirds making use of the many nestboxes that have been installed around the preserve. This is one of the sweetest sights we will behold, and one which less than a decade ago was not even possible. 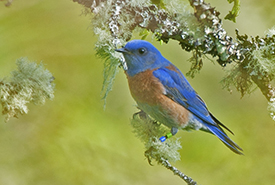 The beautiful blue songbirds were a once common sight on Vancouver Island and the Gulf Islands. Known as harbingers of spring, their song would be heard as the weather turned warm and the vibrant wildflowers began to bloom in Garry oak meadows and woodlands. But until the Bring Back the Bluebirds project started up in 2012, no nesting pairs of western bluebirds had been documented on Vancouver Island or the Gulf Islands since 1995. This was due to habitat loss and competition from introduced species, among other factors.

Bring Back the Bluebirds is a multi-partner reintroduction project that is working to re-establish a breeding population of western bluebirds on southern Vancouver Island. The initial five years of the project (2012-2017) focused on bringing mating bluebird pairs up from Washington State. In recent years the focus has shifted to supporting the fledgling population which has taken root in the Cowichan Valley, including on NCC's Cowichan Garry Oak Preserve.

This February (2020) a project volunteer spotted the first western bluebird of the year. Thanks to the band on her leg, we know she was born in the Cowichan Valley in 2018 and had two successful clutches in 2019. This is a testament to the success of this species reintroduction project. 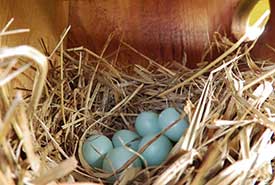 Currently led by the Cowichan Valley Naturalists and the BC Conservation Foundation, Bring Back the Bluebirds is supported by a wide range of partners. The Nature Conservancy of Canada is pleased to be involved by supporting nestboxes and maintaining prime bluebird habitat at the Cowichan Garry Oak Preserve.