Darkwoods, BC (Photo by Bruce Kirkby) 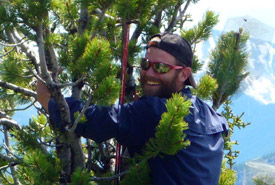 Adrian Leslie is concerned about an endangered pine tree that grows in high elevation forests and at treeline in the mountains of BC and Alberta. Whitebark pine occupy an important position in sub-alpine ecosystems, helping to stabilize slopes and temper the snow melt, as well as providing food and shelter for many species of wildlife. If this tree were to disappear altogether, the landscape in which it is normally found would be radically altered.

On Darkwoods, whitebark pine has been found along ridges and the steep, upper slopes of several mountain tops, making them a challenging study subject to work with.  Adrian was undeterred. With funding from the Columbia Basin Trust, he spent  the summer and fall of 2011 establishing a research study on Darkwoods that he hopes will help efforts to restore whitebark pine throughout the region.

We talked to Adrian about whitebark pine and how his research will help conservation efforts for this species.

Why is whitebark pine an important species? 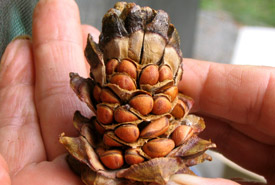 AL: Besides being an aesthetically pleasing tree species in the mountains of western Canada, this is a pioneer species in high elevation forests, often growing in locations too harsh for other tree species to survive. Whitebark pine is a relative of the tree species that produces pine nuts, and produces similarly sized seeds that are very nutritious and are highly sought after by wildlife including bears, squirrels and birds.

How did you come to research whitebark pine?

AL: I had a summer job working for Parks Canada in the Rocky Mountain Parks doing health surveys on whitebark pine a decade ago. It quickly became apparent that most of these trees were dying due to white pine blister rust, a non-native fungus that infects and kills whitebark pine trees. The results of the study that I worked on was used to support the listing of whitebark pine as endangered by COSEWIC (The Committee on the Status of Endangered Wildlife in Canada) who said that it has "a high risk of extirpation in Canada."

I spent four years working in the National Parks doing whitebark pine research, and when I moved to the Kootenays, where the whitebark pine are also in trouble, I wanted to put what I had learnt to use in on the ground restoration. Last year (2011) was a pilot study to see if these restoration techniques can be effective, and to begin locating healthy parent trees that seeds can be collected from. This year I hope to expand the efforts and locate more trees, collect more cones and begin restoring whitebark pine on a larger scale.

How do you go about your research?

AL: I start by locating healthy whitebark pine trees that are producing cones that I can collect for restoration purposes. In order to collect viable seeds, I place cages over the cones early in the summer to protect them from harvest by wildlife (birds and squirrels). In the fall I return to collect the cones when the seeds are mature. I then set up trials to see if planting the seeds directly in the ground at restoration sites is a viable option (as compared to growing them in a greenhouse, then planting them at the restoration site).

In 2011 I located 40 healthy trees, and collected approximately 40,000 seeds. A subset of these seeds was sent to a greenhouse for testing to see if they are resistant to white pine blister rust, and then for replanting in a few years. Other seeds were planted directly in the ground on Darkwoods, and these seeds will be monitored for several years to see what their germination and survival rate is.

Why have whitebark pines become imperilled?

AL: There are four main threats to whitebark pine:

What can individuals do to help protect these trees? 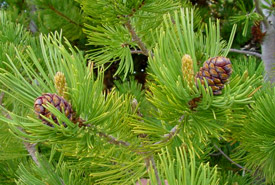 AL: Don’t cut down whitebark pine trees. Whitebark pine can be identified by its location (between 1,800 and 2,300 metres elevation), and by the number of needles (five) in a bunch; “groups of five, leave it alive.”

I also work in areas outside of Darkwoods, and am always looking for healthy trees that I might collect cones from. They can be difficult to find, and not all stands are mapped, so if you are hiking, biking or skiing in the mountains of the west Kootenays and you see a stand of whitebark pine, please contact me at at 250-505-2669 or adrian.whitebark@gmail.com.