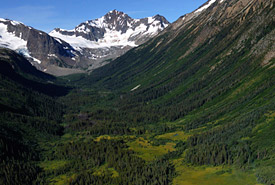 This expansive, largely undisturbed stretch of valleys, alpine meadows, wetlands and forests links the rainforests of the Pacific Coast and the dry grasslands of the Central Interior. The most compelling conservation feature in this natural area is the presence of intact movement corridors for fish, bears and birds.

The Klinaklini and Homathko River valleys host some of the province's healthiest populations of grizzly bears, which are considered an umbrella species that indirectly supports many other members of the ecological community.

The Chilko River salmon run attracts bears to this region. Songbirds travel north-south up the low-elevation valleys. Other wide-ranging animals, such as grey wolf and cougar, inhabit the Homathko and Klinaklini river areas. Old-growth forests provide excellent winter ranges for mule deer, mountain goat and moose. Migratory waterfowl and other birds frequently stop in the wetlands of this region.

The natural area is located in the heart of Tshilhqot’in territory.

Resource extraction such as logging and fishing, ATV use and other high-impact recreation activities are threats in the area. However, overall the West Chilcotin area's forest and aquatic habitat have high ecological integrity.

When the Nature Conservancy of Canada (NCC) first began to acquire properties in the Tatlayoko Valley in 2000, much of the region was zoned for subdivision and agriculture. NCC's projects in the West Chilcotin are part of a growing assembly of conservation lands that include provincial parks and other lands acquired by other conservation partners. Together, we are working to ensure the ecological integrity of this significant wilderness area. 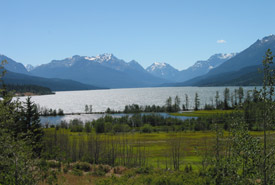 The lagoon at Tatlayoko Lake Ranch (Photo by Brenda Shaughnessy)

NCC has been working since 2000 to acquire an assemblage of conservation areas around the beautiful and abundant Tatlayoko Lake. The work here is a unique opportunity to secure a large functioning landscape before it becomes significantly altered by human encroachment.  Learn more >

The Klinaklini River passes through some of the best of the remaining wilderness in southern British Columbia. NCC is working to acquire the few private parcels in this valley for conservation. Learn more >