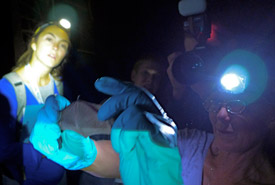 When Katy Fulton shimmied through a small opening in a jumble of house-sized boulders on the Chase Woods Nature Preserve, she wasn’t sure what she was going to find on the other side. After a tight squeeze she found herself in a dark space big enough to stand up in. Her headlamp shone onto rough rock walls that extended deeper than she had expected into the mountainside.

Suddenly the whir and buzz of a multitude of beating wings filled her ears and dozens of airborne creatures careened around her head. Katy had disturbed a colony of nesting Townsend’s big-eared bats.

“It sounded like a helicopter was lowering down on my head,” she recalls, a huge smile on her face despite having been startled by swarming bats. “There were dozens of bats suddenly flying around me, turning at the last moment and shooting away. I screamed.”

A conservation technician with Nature Conservancy of Canada (NCC), Fulton found exactly what she and a small crew of biologists had come looking for.

See the search in images: click to enlarge and read the captions

Outside the cave, the rest of the bat-searching group didn't fully grasp at first what Fulton was telling them when she squeezed back out of the cave.

“They assumed I had only found three or four bats. Not a whole maternal roosting colony!”

Bats are one of the lesser-studied species by biologists, thanks to their nocturnal nature and penchant for flight. Myth and superstition have followed these animals for centuries. But in fact, bats serve as important regulators of insect populations as these adept hunters can each eat thousands of flying insects in a night.

Bats are also highly sensitive to disturbance. Half of the 16 species of bats found in British Columbia are considered at-risk species. The most vulnerable habitat for bats is their nesting caves and hibernacula where they overwinter. If a roosting cave (or hibernaculum) is visited by too many humans or, even worse, totally destroyed, the likelihood of the colony finding an alternate roost is rare. Without a secure network of suitable roots the bat population will collapse.

The challenge of capture

The cliffs and caves of the storied mountain seemed like perfect bat territory, but until now no one had actually documented bats living in the area. Documenting the species on our conservation properties is an important step in the conservation management of the land. We need to know what's there before we can develop an appropriate management plan to best protect the habitat for species at risk.

But catching bats is no easy task. To catch bats in flight, the group set up mist nets along their travel corridors, including pathways and stream beds. When travelling through corridors bats rely less on their echolocation, which would allow them to detect and avoid the thin filaments of the net. In other areas the biologists used an ultrasonic bat detector to eavesdrop on the bats' echolocations — discrete ultrasonic signals that echo back to the bats and allow them to locate objects such as prey or obstacles. The third technique used by the group was to look for evidence of bat activities, such as bat droppings in caves and hollow trees.

The group stayed out on Chase Woods until after midnight. Good luck (and bat expertise) resulted in the discovery of several previously unrecorded species for the area. Three bats representing three different species — Townsend’s big-eared bats, yuma myotis and Keen’s long-eared myotis — were caught in the nets, and a fourth species — big brown bat — was identified by its unique echolocation sounds.

After Katy discovered the bat cave earlier in the day, the other biologists squeezed into it to see for themselves what had been found. The walls were studded with mother and juvenile bats. The females were clearly lactating, the babies clinging close to their mothers. Gently, the leading bat expert of the group, Trudy Chatwin, cradled one of the baby bats in her hand, its oversized ears and pug-like face making it easy to identify it as a Townsend’s big-eared bat. Trudy was the only one allowed to handle the bats, and used separate gloves for each individual in order to prevent cross-contamination.

After half an hour, the team crawled out of the cave and left the colony in peace.