Witnessing the return of a wetland 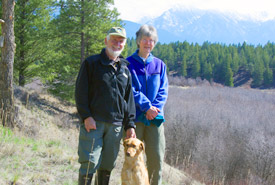 When Carol and Walter Latter sit down to eat in their sunroom, they look out over farm fields and beyond to ponderosa pine forests and, in the distance, the Purcell and Rocky mountains. The couple has lived on this land located just outside Kimberley, BC, since the mid-1990s. They quickly came to love the property and all of the wildlife that shared this space with them. Motivated to protect this special place from subdivision or other degradation, the Latters partnered with the Nature Conservancy of Canada (NCC) in 2014 to turn the property into the Cherry Meadows Conservation Area. 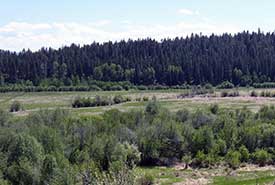 Farm fields on Cherry Meadows before restoration (Photo by NCC)

Cherry Meadows was once a natural mosaic of marshes, ponds, seasonal pools and forested wetlands that filtered fresh water and nurtured wildlife of all shapes and sizes. But in the early 1900s, the wetlands were ditched, drained and filled to create flat dry fields for hay production. A century later, the uncultivated fields were overrun by a dense growth of reed canary grass, a non-native grass species that prevents native forbs, shrubs and trees from re-establishing. 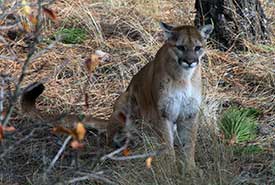 Despite the loss of natural habitat, Cherry Meadows is still a place full of life. American badger, grizzly and black bears, cougar, elk, deer and moose all move through the property. Water-loving animals like beaver, muskrat, mink, duck, geese and other waterfowl congregate in the scattered small wetlands that remained. A favourite annual visitor is the rare sandhill crane, which nests in the area.

The opportunity to restore the old farm fields and create even more habitat for wildlife was a motivating factor in NCC's involvement in creating the Cherry Meadows Conservation Area. Three years after conserving the land, NCC launched an ambitious project to restore a naturally functioning wetland complex to the fields of Cherry Meadows. The project re-created 16 hectares (40 acres) of emergent, ephemeral and wet-meadow wetlands by filling ditches, removing fill and reshaping the land to more natural contours. 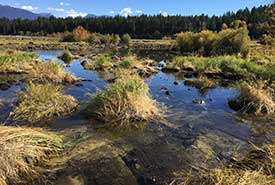 Once a farm field, now a new wetland (Photo by NCC)

Over the course of two field seasons, the pair oversaw the work to disable the ditches, diversions, filling and sloping that had drained naturally occurring water from the site for a century. Loosening the compacted soils allowed ground water to once again well up into the meadow. And planting native shrubs and grasses have started to re-establish natural habitat for a wide range of plants and animals. 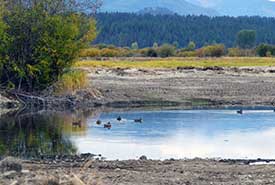 “The wetland restoration project has been front and centre in our lives (and from the sunroom table where we eat every meal),” said Carol. "We were enthralled watching how the wetlands and ponds evolve from acres of reed canary grass to expanses of raw dirt, clay and gravel, including shallow basins, to the gradual filling of the ponds as the water ran in or rose from below.” 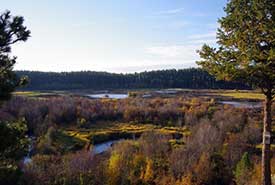 The Latters didn’t need to be sold on mosquito control to be excited about restoring wetlands on Cherry Meadows. The more wildlife that uses these fields, the happier the couple is. Having a front row seat to such a significant transformation to the landscape reaffirmed for the Latters just how resilient nature can be, especially when it is given a helping hand.

“It didn’t take long for the Canada geese and ducks by the dozen to find the new ponds,” says Carol. “So far we have identified mallards and rusty-red ruddy ducks with their baby blue bills. One morning at daybreak, a pair of trumpeter swans floated in the mist rising from the water, but they didn’t stay around for long. So far the beavers are sticking to the creek, but we think they won’t be able to resist the outflow spillways for long. We hope to see muskrat one of these days too.”