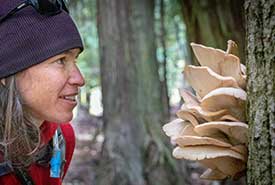 A participant inspects a mushroom (Photo by Pat Morrow)

Forests in the fall are magical places. Seasonal rain reinvigorates the ecosystem after the hot summer sun has dried much of the land. And with the return of rain comes one of the forest’s most beguiling lifeforms: mushrooms.

Mushrooms are the fruit of fungi, a diverse group of organisms that create extensive underground networks of tiny, nutrient-transporting tubes. Fungi play an important role in recycling nutrients in the forest. They attract our attention as food, medicine, pathogens and simply because they can be so visually striking. 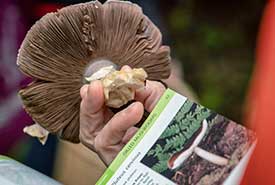 Biologists are exploring ways that fungi can help with everything from restoring degraded environments to increasing our understanding of climate change. These organisms seem to provide a lot of benefits to humans and the natural world. But the truth is, right now little is known about where fungi grow in British Columbia.

In 2017, mycologists (fungi biologists) compiled a list of 3,009 macrofungal species (those that can be seen by the naked eye) in BC. This is likely only a fraction of the total number of species that occur in the province. More research is needed to create a complete picture of where and how many fungi grow in BC. 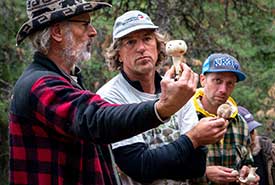 In October 2018, the Nature Conservancy of Canada (NCC) hosted a mushroom walk on the Midgeley Conservation Area near Creston, BC. In addition to introducing people to the wonderful world of fungi, this event also doubled as a citizen science bioblitz. Participants helped identify and catalogue over 100 different species of fungus in a few hours.

With so little past inventory work directed at fungi, bioblitzes like this are likely to turn up new species records for the region, and possibly species new to science. 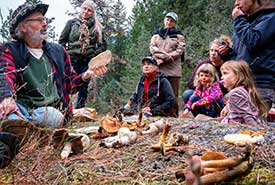 The well-attended event was well-timed with an excellent mushroom season and a perfect fall day. People of all ages came out to walk and gather mushrooms in a wide range of habitats: wet forests, dry forests, wetlands and rocky outcrops.

Starting in the Creston Valley Wildlife Management Area and winding up the slope to NCC’s Midgeley Conservation Area, the route followed part of the historic Dewdney Trail. It provided spectacular views of the Creston Valley.

Under the guidance of mycologists Tyson Ehlers (Masse Environmental Consultants) and Larry Evans (Western Montana Mycological Association), participants collected over 100 species of mushrooms during the walk. These will be properly documented. Samples of each will be submitted to a fungal herbarium at the University of Victoria. 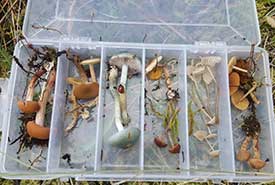 Combined with a spring inventory that took place in higher elevations on the neighbouring Darkwoods Conservation Area, NCC has now formally documented over 200 species of fungus in this region, many of which are new records for the area. This represents one of the largest single regional studies focussed on macrofungi diversity in the province.