A research drone hovers above CGOP (Photo by Paul Hacker) 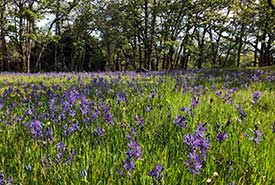 Imagine you are a bird. Your wings are supported by the wind as you soar over a meadow surrounded by forest. The trees hide your shadow from the insects and mammals that forage in the plants below. Purple, red and yellow flowers float on a sea of green, harbouring both your food and shelter. You are thankful for the diversity within this system, as it enables you to share your home with many others.

At the Cowichan Garry Oak Preserve, this sentiment is shared among over 100 species. Plants, birds, mammals and reptiles all coexist in an ecosystem considered to be one of Canada’s most biodiverse. To land managers and nature enthusiasts, this ecosystem has value outside of the all-mighty dollar. For decades, Garry oak ecosystems have provided resilient safe havens for native species experiencing human-caused pressures within their home ranges, saving many endangered species from extinction. Due to continued urbanization and land use change, however, these ecosystems are more threatened than ever. 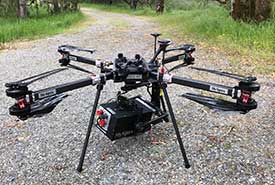 The predicaments for those who wish to protect these areas are many. One such issue is how best to monitor the health and variety of plants that form the foundation of this landscape. To address this question, the Nature Conservancy of Canada (NCC) has teamed up with the Canadian Airborne Biodiversity Observatory (CABO). This collaboration of scientists is focused on understanding the plant dynamics of multiple ecosystems across the country through the use of imagery taken from sensors mounted on drones.

The project at the Cowichan Garry Oak Preserve is led by Paul Hacker, a PhD student at the University of British Columbia. Through various types of high-resolution imagery, Paul is exploring the possibility of mapping individual plants as small as 3 cm2 throughout the meadow. This analysis will enable species identification, which can help monitor the spread of invasive plants as well as determine how many individuals of a certain species are present across the site.

Paul is also deploying drones equipped with sensors that can pick up over four times the amount of reflected light as a modern recreational camera. This technique is called imaging spectroscopy and allows researchers to estimate the amount of certain “functional traits” that are contained in a plant. These traits, such as the amount of chlorophyll in a leaf, are indicators of a plant’s ability to survive, grow and reproduce. This information can also shed light on the spatial distribution of specific nutrients, like nitrogen, which are essential to plant growth. 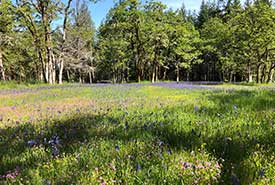 Preliminary results suggest that changes in land use can affect the functional traits of Garry oak leaves that relate to leaf growth and structure. Future research intends to explore if these differences exist within herbaceous and grass species, which could help guide managers in their efforts to mitigate the spread of invasive plants. If proven possible at the site level, this methodology can be scaled to include multiple Garry oak ecosystems across the landscape, providing information relating to the condition of these complex hubs of biodiversity throughout their entire range.