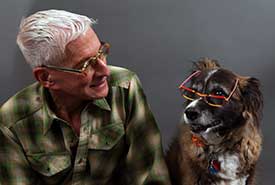 Andrew Beckerman wants to inspire generosity in others. This is why when he gives to the causes that are important to him, he challenges others to make matching donations, effectively doubling the impact of his original gift.

“I want everyone to live better, and Darkwoods is helping all of us live better,” he says. “And I also think the world is a better place if we can save a species from extinction.”

Now, Andrew will be the first one to say that it was not, in fact, he who is responsible for this gift, but rather a very special individual named Jessie.

Jessie and Andrew met in 2006 in Victoria and quickly moved in together. The pair loved nothing more than taking long walks in the nature parks and wild areas around southern Vancouver Island.

“Jessie was not a swimmer, but she would get super muddy following every scent trail,” says Andrew, recalling their walks around lakes and along the seashore. “She was very interested in raccoons, deer and squirrels. And she tried to befriend bears at Botanical Beach.”

Jessie, you may have guessed by now, was a dog. A border collie/golden retriever mix, Jessie was smart, friendly and thought to be pretty. 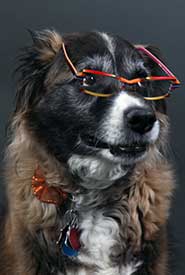 “She was a character — a shaggy, funny dog with a drape of hair. She was every colour a dog could be. She had a beautiful face, a flag of a tail and the sweetest demeanour,” said Andrew. She was a therapy dog at AIDS Vancouver Island, where Andrew volunteered for many years.

On their adventures in nature, Andrew and Jessie grew increasingly alarmed about the many clearcuts and other habitat-destroying development they encountered. Witnessing the steady loss of undamaged natural spaces on southern Vancouver Island and across BC convinced Andrew and Jessie that action must be taken to protect forests and other wild places.

So when Jessie died in 2017 at the age of 13, Andrew looked for a way to honour her love of nature. Or, as he would have it, he was just doing as directed by this smart, generous canine conservationist.

“Jessie’s last will and testament expressed concern that without private donations, wildlife habitat is at risk,” he explained. “Her bequest included a six-figure matching challenge to the Nature Conservancy of Canada for the purchase of land for habitat protection.”

In honour of Jessie’s generosity, there is now a “Jessie’s Lake” on Darkwoods. When the snow is off the mountains, a sign will be installed by the lake in commemoration of Jessie’s generosity. This gesture is a fitting tribute to her interest in the great outdoors, her fondness for wildlife and her skill as an intuitive therapy dog.

Andrew is hopeful that their donation and advocacy for land conservation will inspire others to support the efforts to expand Darkwoods and further protect the habitats of grizzly bear, wolverine, mule deer, peregrine falcon and all the other species that rely on wild spaces for their survival.

Learn more and make a donation in support of expanding the Darkwoods Conservation Area.