Sagebrush Slopes, on the Sage and Sparrow Conservation Area, BC (Photo by NCC)

Managing invasives in the South Okanagan 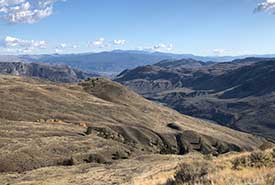 What does it mean to steward a conservation area? Can’t nature take care of itself, if we just keep out of its way? This might work when the landscape in question is far enough removed from introduced disturbances, but much of the conservation land managed by the Nature Conservancy of Canada (NCC) is nestled in and around the developed areas where we live, work and play.

With our mission to protect native biodiversity — meaning the plants and animals that are considered a natural part of the local ecology — NCC must ensure that threats to native flora and fauna are kept in check. One of the most significant threats to natural systems is invasive, alien species — those plants and animals that have moved out of their natural range and are capable of overtaking a landscape to such an extent that they displace native species and diminish ecological diversity and natural resilience.

In the South Okanagan, NCC is managing 1,428 hectares (3,529 acres) of native grasslands across a number of conservation areas. One of these properties — the Sage and Sparrow Conservation Area, west of Osoyoos — provides essential habitat for more than 30 species at risk, including federally listed species such as half-moon hairstreak (a butterfly), long-billed curlew (North America’s largest shorebird) and grand coulee owl-clover. These species require healthy, natively biodiverse grasslands, and so controlling invasive species in this landscape is vital.

“Thanks to funding from the South Okanagan Conservation Fund and expertise and guidance of the Okanagan and Similkameen Invasive Species Society, we have been able to actively manage invasive plants on Sage and Sparrow,” says Danielle. “And after more than five years of consistent management we are seeing great success. There’s been a drastic decline in sulphur cinquefoil at all infestation sites, and 2019 was the first year we haven’t observed Russian knapweed on the Sparrow Grasslands portion of this conservation area. It’s encouraging to know our stewardship efforts are working.” 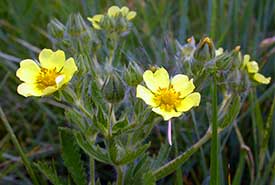 A combination of mechanical, chemical and biological controls are used to manage invasive plant species on NCC’s conservation lands. The methods depend on the sensitivity of the site, degree of infestation and known effectiveness on the target weeds. NCC staff and partners also conduct surveys, monitor changes over time and contribute the data gathered to the provincial Invasive Alien Plant Program database.

Inter-agency collaboration is essential in the battle against invasive species as seeds travel freely across property lines, and it is always easier to control weeds before they become deeply and broadly established. NCC is grateful for the support of the South Okanagan Conservation Fund and the Okanagan Similkameen Invasive Species Society, as well as for our fellow conservation land managers in the area: Ducks Unlimited Canada, The Nature Trust of BC and the Province of BC.

“A healthy natural ecosystem is much less vulnerable to weed infestations,” notes Danielle. “In a vibrant, diverse grassland, invasive plants can have a very difficult time establishing on the landscape. Site disturbance or degraded systems are most at risk to invasive plant establishment. This is why our field monitoring is so important. It helps us stop weeds before they get out of hand. This is a core part of our stewardship.”