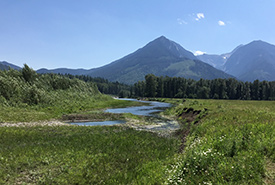 Side channel of Elk River at Morrissey Meadows (Photo by NCC)

Every summer, water levels recede at the Morrissey Meadows Conservation Area near Fernie, BC, drying out a small side channel of the Elk River. Westslope cutthroat trout and bull trout gather here to take refuge from the river’s fast currents. It is here that Kate MacKenzie, the Nature Conservancy of Canada’s (NCC) stewardship coordinator for the Canadian Rocky Mountains program area, stresses habitat restoration as important to improving both ecosystem connectivity and climate change resiliency for the East Kootenay region.

The past and present of Morrissey Meadows 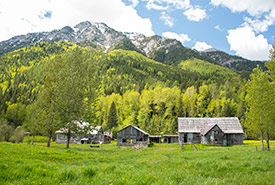 Before Morrissey Meadows was donated to NCC as a conservation area, it was homesteaded by four generations of the Fitzen family. The Fitzens lived off the land and its bounty, building humble homes with timber and fishing from the Elk River. When the family entrusted NCC to steward the land for conservation, Kate focused on the shoreline of the fragile side channel connected to the river. The absence of trees next to the channel meant that there were no strong root networks to maintain the shoreline’s soil, resulting in erosion and flooding.

Meanwhile, the Regional District of East Kootenay (RDEK) also noticed the value of Morrissey Meadows for its trout populations. RDEK approached NCC about constructing a deeper side channel to the Elk River, along with several accompanying pools, to ensure water retention throughout the summer. For species-at-risk like westslope cutthroat trout and bull trout, a permanent side channel provides safety for older juveniles and adults from the heavy sediments originating from Elk River, increasing their survival rate.

“These new pools need to have features such as undercut banks, boulders, large woody debris and overhanging vegetation,” explained Kate.

How to improve a shoreline 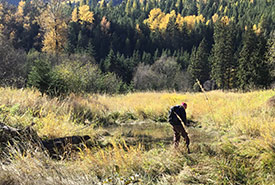 The process of planting vegetation requires a variety of native tree species — from willow and dogwood to cottonwood — and patience. Starting with species that grow fast and easily by the shoreline, the soil would eventually be able to harbour cottonwood trees after a few years. These overhanging cottonwood trees provide not only shade and protection for fish, but also prevent sediment pollution and absorb excess nutrients from fertilizer runoff. The strong root systems of these growing trees contribute to the development of a stable shoreline, and a strong undercut bank where fish can hide from predators.

When the Fitzen family still resided at Morrissey Meadows, their home had endured three ravaging floods. These risks remain a concern in the East Kootenay region and increase the vulnerability of those living near the river, especially as climate change increases the chances of major flood events. In the nearby town of Cokato, where an upstream section of the Elk River had been threatening the community with floods, RDEK hardened its shorelines to stop excess erosion and reduce flood risks. This resulted in the loss of a fish habitat, which RDEK now plans to rebuild in Morrissey Meadows. The emphasis on establishing deeper channels, side pools and stable shorelines by both NCC and RDEK will safeguard freshwater species and retain water for longer throughout the season.

For both land and aquatic species 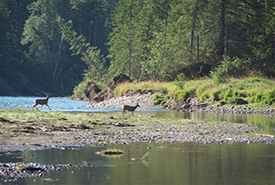 Although the conservation area is only 43 hectares and supports mainly large mammals who use the land as a wildlife corridor, Kate hopes that Morrissey Meadows can serve as an example for incorporating ecosystem services in community planning. “Restoring function back in major river floodplains by improving riparian zones, the areas where land meets the water, at a larger scale will go a long way toward helping communities adapt to the impacts of climate change,” she said.

For the next five years, RDEK and NCC will continue to actively steward the shorelines of Morrissey Meadows as the vegetation planted transitions into a cottonwood forest, added Kate. She hopes that the trout, displaced by the annual dry seasons of the past, will find a safe resting site in this new habitat before they continue their journey along the Elk River. In the meantime, the stable shorelines will ensure that the grizzly bears and lynx travelling from the nearby Elk Valley Heritage conservation area can continue to traverse through Morrissey Meadows as a wildlife corridor.