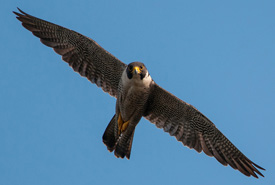 Peregrine falcons are masters of stealth. With razor-sharp eyesight even in the lowest of light, this raptor can catch its prey with one fatal, swift dive at speeds of up to 320 kilometres per hour.

Not only nimble in its hunting, the species also managed to dodge extinction and is now on the rise in Canada. According to a recent report from the Committee on the Status of Endangered Wildlife in Canada (COSEWIC), one of the two sub-species of peregrine falcon found in Canada is no longer considered an at-risk species.

Populations of peregrine falcons plummeted in the mid-20th century as a result of the widespread use of pesticides, such as DDT. The species was first designated as endangered in Canada in 1978.

Following a phase-out of organochlorine pesticides in North America the 1970s, along with a captive breeding and reintroduction program, populations have recovered to the point that COSEWIC says the falcon is no longer at risk across most of the country. Population numbers have increased throughout most of Canada, as the species recolonized much of its former range. it even learned to exploit new habitats in urban centres. However, in British Columbia, the revival of the peregrine falcon in lagging.

Peregrines on the west coast form the subspecies pealei, which is still considered at risk, though the population is seen as growing. Efforts to conserve nesting habitat will support the ongoing recovery of the subspecies. The Nature Conservancy of Canada (NCC) has a number of conservation areas that provide the perilous cliff ledges that this bird prefers as nest sites, including within the South Selkirk Mountains and on conservation lands on the West Coast.

By protecting habitat for this species, NCC is helping to foster an environment suitable for nesting and hunting. Other actions taken to ensure the health of the species include monitoring the impacts of other toxic chemical on peregrine falcons. The continued use of pesticides in the wintering grounds is still prevalent to the health of these birds, as well as this yet-unknown effects of new pesticides licensed in Canada. Other threats include habitat degradation and fragmentation, human interference and poaching.

Peregrine falcons are usually found in open habitats with tall structures. Because the stark concrete of buildings resembles cliffs in the wild, peregrines can be found living on skyscraper ledges, quarries, transmission towers and even silos. Some nests can be found more than 3,600 metres high.

During migration, these raptors can be found at barrier islands, mudflats, coastlines, lake edges and mountains, such as those found on NCC’s coastal BC properties.

Conservation efforts by NCC and others will support the continued recovery of the peregrine falcon, pealeic subspecies. This will allow it to join the ranks of wildlife that have officially and fully faced extinction and made the perilous journey back.