Remembering the Steward of Swishwash Island 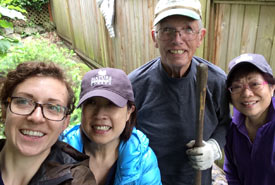 Dick Loomer hosted volunteers at his home to plant trees for Swishwash Island. (Photo by NCC)

Dick Loomer's love of the outdoors was undeniable. He was always looking for a way to spend more time in nature, whether hiking, windsurfing or kayaking around Vancouver, where he lived and worked as an orthopedic surgeon. Retirement, which he eased into as he reached his seventies, simply meant more time for being active outside.

One favourite outdoor pursuit of Dick's was to launch his kayak or windsurfer into the mouth of the Fraser River, near Sea Island and the Vancouver International Airport, to explore the various islands and salt marshes that have accumulated in this important transition zone between river and ocean. It was during his time enjoying this area in the early 2000s when Dick reached out to the Nature Conservancy of Canada (NCC) to ask about a scrubby, undeveloped 29-hectare (72-acre) island that was a popular site for migratory birds and other waterfowl in the area. 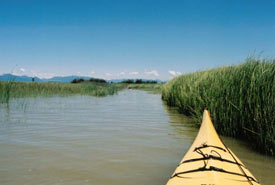 “I had kayaked and windsurfed around Swishwash for several years when I learned it had been given to NCC,” Dick wrote in a 2009 essay in the Globe and Mail. “I enquired if they needed a caretaker and they kindly allowed me to be its steward.”

NCC staff were delighted to have this charming and dedicated outdoorsman become the volunteer caretaker of the Swishwash Island Nature Sanctuary. And so Dick began kayaking over to Swishwash every week, sometimes multiple times a week. Eventually he started helping with NCC's stewardship needs on the island — pulling invasive weeds and replanting native vegetation.

“My main duty is to try to control the non-native or invasive species of plants growing on the island and plant native trees, mostly Sitka spruce, western red cedar, Douglas-fir and cottonwood,” he wrote. “Controlling non-native species sounded like a fairly straightforward task until some modest effort brought me face to face with the two most prolific and pervasive plants nature has yet devised: Scotch broom and Himalayan blackberry.”

In an interview with The Province newspaper, Dick shared his secret weapon against invasives: "I have a special hoe that I got at Lee Valley, which is just perfect. It's four feet long with a nice, heavy blade and swings very nicely. I keep the blade nice and sharp and just one good whack usually does it."

In 2010, Dick was featured as a Champion of Conservation in a video project produced by Oasis TV. You can hear his love and respect for the wildlife that frequents Swishwash, including coyotes, eagles, salmon and the thousands of snow geese that use the island as a stopover as they fly south from the Arctic.

Dick was concerned about the loss of nature in and around Vancouver, and was willing to do the steady hard work of restoring degraded habitats.

“I don't know that I have very much to say to the rest of the people of the world on how to behave to maintain our natural environment, but having enjoyed it all my life I guess I would be very sad to think that my granddaughter couldn't enjoy the same things I do.”

In recent years Dick's health declined, preventing him from visiting Swishwash very often. He found other ways to contribute to the ongoing restoration of the island. Just this past May he hosted volunteers at his home to repot Douglas-fir seedlings in preparation for planting in the fall.

Sadly, Dick passed away on June 27, 2017, after having spent more than 15 years tending to the Swishwash Island Nature Sanctuary, where he pulled countless invasive plants and planted hundreds of trees.

"We were carefully tending to the 100-plus trees we were expecting to start planting this fall," shared his wife, Linda. "Dick was an avid outdoorsman, conservationist and a very humble man. He would have welcomed the opportunity to share with the volunteers the history of Swishwash and the planting of the trees. It is comforting to know that Dick has left a legacy of hundreds if not thousands of trees planted on this Earth and in particular on Swishwash. He loved that island so much."

Dick Loomer, the Steward of Swishwash, will be fondly remembered by all NCC staff and volunteers who had the good fortune of meeting him.

“There is a hole in my heart and, in fact, in the universe because Dick took up so much room with his giant smile and dedication to conservation, to his family and to Swishwash,” said NCC's BC director of development, Michael Curnes.

“What a loss. I feel blessed to have spent some time with Dick and hear his stories, learn from his great knowledge and be inspired by his passion,” said Tanya Wahbe, director of NCC's West Coast program. “May he rest in peace knowing that careful attention to Swishwash Island will continue.”