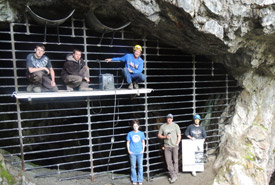 Bats love abandoned mines. Their cool dark interiors offer sanctuary from the heat of summer days, as well as quiet safety during their months-long winter hibernation. These hibernacula (hibernation roosts) are critical habitat for bats. When they are destroyed or repeatedly disturbed, bat populations plummet.

Abandoned mines also beckon adventurous humans who like to explore the mine’s dark recesses. Unfortunately, not only do human visitors risk fatally disturbing hibernating bats, they also can inadvertently track a very dangerous fungus into the mine that will threaten the survival of the bats.

This is why the Nature Conservancy of Canada (NCC) joined a partnership of concerned groups in the Kootenay’s to close off the entrance of Queen Victoria Mine, near Nelson. Secure gates were installed in June 2013 to prevent human entry while still allowing the bats to easily navigate into to mine.

British Columbia has 16 species of bats, half of which are currently listed at risk due to one or more conservation concerns. Three species overwinter in Queen Victoria Mine, and at least seven species use the old mine site during the rest of the year.

Why our bats are in trouble

A new fungal disease affecting bats, called White Nose Syndrome, was discovered in 2006. This fungus, thought to have been introduced to North America from Europe, kills bats while they hibernate. This fungus has not yet been found in BC. Spores of the fungus that causes White Nose Syndrome can be unknowingly tracked into bat hibernacula by humans.

During winter hibernation, bats’ body temperatures are cold, their heart rates are low, their immune systems are vulnerable and they are living off of stored fat reserves. They are vulnerable to disturbance from humans. When disturbed, they warm their bodies and use up these precious fat reserves. 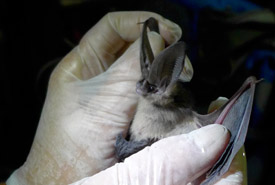 Bats are the only flying mammal. They are also the primary consumers of night-time insects. While loss of habitat continues to be a threat, human encroachment and a new emerging fungal disease threatens the survival of bat species like never before.

Bats are long-lived,  with some species living 40 years. Bats have few young — most species give birth to just one pup each year.

The project was generously funded by:

The Nature Conservancy of Canada was proud to partner with the following groups to secure the Queen Victoria Mine: