Spider Island, BC (Photo by NCC) 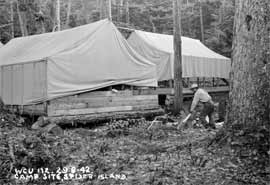 In 2016, the Nature Conservancy of Canada (NCC) acquired a remote property on BC's central coast, on a small island named Spider. The property is the only private parcel on the island, which is otherwise owned by BC Parks. From a conservation perspective, this acquisition secured the protected status of the entire island, which is covered in old-growth temperate rainforest. From another perspective, protecting Spider Island also offers the chance to remember a unique and little-known role the West Coast played during the Second World War.

In addition to its natural features, and its importance as part of the traditional territory of the Heiltsuk Nation, Spider Island also carries with it a unique history as a former Second World War radar station. Following the attack on Pearl Harbour, the Canadian government established a network of radar stations along the BC coast to provide an early warning system for attacks from the Pacific.

Russ Hellberg, a veteran of the 101 Squadron (North Island) of the Royal Canadian Air Force Association (RCAFA), has been working with some of his fellow vets to ensure the memory of these radar stations is not forgotten.

“We wanted to preserve the military history in our area of responsibility,” says Russ, who flew fighter jets during the Cold War. “A lot of the old information has disappeared. We can't let this happen.”

Russ's research has uncovered the history of the 14 flying and radar stations, as well as the 13 fatal crashes that occurred on the West Coast, which is being commemorated with the installation of plaques on sites up and down the coast.

One of these plaques will be erected on Spider Island. It tells the story of the construction, operation and eventual closing of the RCAF Station Spider Island. Construction began in 1942, with crews carving space out of the untouched forest for the radar surveillance equipment, a camp site, operations building and powerhouse. The station became operational on June 11, 1943, and ran until it was disbanded on August 10, 1945.

At the height of its activity, the station supported 70 personnel, who, despite the remote location, enjoyed two movies a week, volleyball and badminton tournaments, a station paper (The Spider Web) and visiting entertainment performances. Occasionally a couple dozen girls from Ocean Falls, a community some 45-miles by boat away, would make the journey to the island for dances in the Mess Hall.

The station suffered through the rough coastal conditions, with bad weather damaging roads and power lines. High winds frequently required the radar array to be locked down. In the face of this ruggedness, the station was kept clean and neat, even sporting painted hydrants, a flag pole, streetlights and gardens. All of which “made the station as livable as could be expected during wartime in the sticks,” notes the text on the commemorative plaque.

Following the war, a detachment of four men remained on Spider Island to operate a radio signal that aided aircraft flying between California and Alaska. Advances in navigation and aircraft ranges eventually outstripped the need for this technology, and the Spider Island radar station was completely shut down.

Today the forest is reclaiming the space cleared for this 20th century military installation, erasing all traces of this history. Russ and his friends know that preserving this history is a rush against time.

“Our average age is about 80,” he says. “We took it upon ourselves to do these memorials.”

Russ is now looking forward to good weather in the spring so that he can accompany the plaque up to Spider Island by helicopter and witness it being erected in memory of the island's role in Canada's military history.