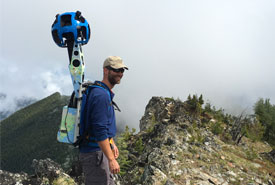 Adrian Leslie with the Google Trekker (Photo by NCC)

This summer, the 50-lb device will make its way to 14 Nature Conservancy of Canada (NCC) conservation areas. Earlier in the week, the tour stared at Coyote Lake Conservation Area in Alberta.

The Google Trekker camera is made of 15 lenses mounted on a backpack to point in different directions. The person wearing the equipment walks around while it takes a 360-degree image every 2.5 seconds. Google will stitch together the collected images to create a virtual trekking experience similar to Google Streetview.

"You have to keep it steady,” says Adrian Leslie, who wore the Trekker for part of the Darkwoods mapping. “You don't want all the images blurry and moving around, so it's a bit of a workout, especially on uneven ground.” Adrian is NCC's Darkwoods project manager, overseeing the massive restoration and stewardship activities on this vast conservation area.

Located along the southwest shore of Kootenay Lake, between Nelson and Creston, Darkwoods is the Nature Conservancy of Canada's largest conservation area, spanning 63,000 hectares (155,000 acres). The vast property reaches from the sandy beaches of Kootenay Lake up to the highest mountain peak in the South Selkirk mountains, and encompasses over 50 lakes. Its purchase in 2008 was the largest private land acquisition for conservation in Canadian history.

Mountain caribou, grizzly bears and many smaller animals reside in the various habitats Darkwoods supports and give the area ecological importance. The ecosystems found on Darkwoods are naturally rare. Inland temperate rainforest, which has the highest diversity of tree species in BC, covers Darkwoods. 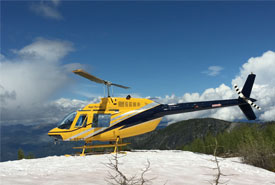 A helicopter arrives at Darkwoods (Photo by NCC)

The site also connects to other protected land — West Arm Provincial Park to the north and Creston Valley Wildlife Management Area to the south, doubling the size of protected lands in this area and greatly enhancing its overall conservation value.

Darkwoods is not an easy place to visit. With a history of logging and ongoing industrial activity on the roads, this conservation area offers only limited access for the most dedicated outdoors enthusiasts. Google Trekker provides an easy way for people all over the world to experience the beauty of Darkwoods.

With the help of a helicopter, Adrian and his colleagues took the Trekker to one of the most inaccessible parts of the conservation area: the highest alpine peak on the property. The Trekker team spent six hours hiking on  Kootenay Mountain, which is the highest peak not just on Darkwoods, but in all of the South Selkirks.

The group trekked through alpine larch and whitebark pine forest, following a ridge as far as they were able, with the Trekker capturing stunning vistas that stretched hundreds of kilometres. They descended a steep slope to reach a small lake, skidding over snow that lingers in this high, cold terrain well into the summer. Even though it was early July, the wildflowers were still a couple weeks away from emerging. 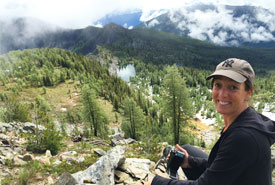 After Google processes the imagery and uploads it to Google Maps Trek, anyone online will be able to experience a virtual version of the expedition, with the goal of providing visual public access to the important natural landscapes that the Nature Conservancy of Canada protects.

“Google Trekker will allow people to experience a little bit of Darkwoods in an area you can't otherwise get to,” says Adrian. In BC, Google Trekker footage was previously captured in the summer of 2015 at the Nature Conservancy of Canada's Chase Woods Nature Preserve on Vancouver Island.