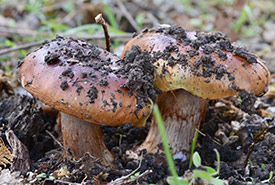 Below the ground at the Nature Conservancy of Canada’s (NCC’s) Cowichan Garry Oak Preserve, the biodiversity of the microscopic fungal world rivals that of the meadow above ground. For every Garry oak tree that stands strong against the brash winds and stormy rains of Vancouver Island, a network of fungi surrounds its roots, sustaining the oak tree with water and nutrients while protecting it from harmful bacteria, viruses and toxins. Referred to as a mycorrhizal relationship by biologists, the intricate connection between Garry oak trees and their associated fungal species is still not fully understood, though this relationship is considered key to maintaining the ecological health of Garry oak meadows.

Fungi experts in British Columbia are currently studying the identity of the mycorrhizal fungi specifically associated with Garry oak, a species native to the west coast of North America. A research team from the University of British Columbia (UBC) and the University of Victoria has discovered that west coast mycorrhizal fungi are suffering from a long-standing history of mistaken identity. 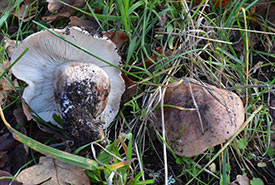 “When Europeans first settled on the west coast of North America, they presumed that a lot of the fungi species here were the same as their lookalikes in Europe,” explained Shannon Berch, PhD, a retired UBC botany professor and researcher with the BC Ministry of Environment. She added that many species, not only fungi, on the west coast are misidentified and their true identities are still unknown today.

Focussing on Garry oak trees and their mycorrhizal fungi, Mary Berbee, PhD, and her colleague Alice Ma looked to genes to find out the true identity of these fungi species. Just by matching the genes of mycorrhizal fungi found on Garry oak trees to a genetic database of species already discovered, they found that many species were misidentified as European while some species had not been documented at all. 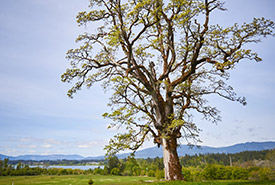 Inspired to sort out some of these cases of mistaken identity, Shannon's colleagues - Paul de la Bastide, PhD and Rachel Witt - ventured into the Garry oak meadows of Vancouver Island last autumn to collect the aboveground fruiting bodies — also known as mushrooms — of these species. They travelled to 22 sites with Garry oak trees, including the Cowichan Garry Oak Preserve. By matching the genes of the mushrooms with the genes of the mycorrhizal fungi found on root tips of Garry oaks, the team would be one step closer to uncovering the true identity of these fungi, as well as their evolutionary relationships to other fungi.

“So far, we only have ‘species hypotheses’ for what the fungi could be,” said Shannon. From over 50 samples collected, only less than half could be closely matched with an already identified species.

Untangling decades of species misidentification is complex and time consuming. As their research goes on, the team of fungi enthusiasts hopes that understanding of the microscopic world beneath the soil will reveal the intricate connections between species, especially in these rare Garry oak ecosystems. 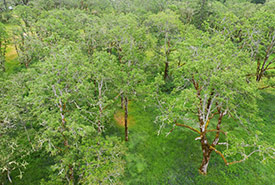 “So little is known about Garry oak ecosystems because they’re largely gone,” said Andy MacKinnon, PhD, a mycologist participating in this study. “Over 95 per cent of the original range of Garry oak ecosystems have been converted to other uses. Conservation of this ecosystem, like at the Cowichan Garry Oak Preserve, is incredibly important and beneficial to our understanding of mycorrhizal fungi.”