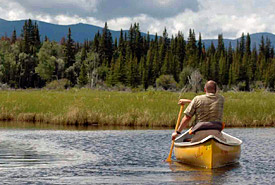 Canoeing at the Daphne Ogilvie Nature Sanctuary, BC (Photo by Bernadette Mertens-McAllister)

In recognition of World Wetlands Day on February 2, Hillary Page, director of conservation with the Nature Conservancy of Canada (NCC), BC Region, is reminding us that the conservation and restoration of wetlands in British Columbia must be a top priority.

“Wetlands are one of our most important habitats,” says Hillary. “We know that at least half of the wildlife in North America rely on wetlands for at least part of their life cycle. Yet we don’t have a really complete picture of the extent and health of wetlands in this province.”

In BC, wetlands cover only five per cent of the land base, but they provide critical habitat to a majority of wildlife species at some point in their life cycle. However, these ecosystems are disappearing very quickly due to residential and commercial development, conversion to agriculture and invasive species.

“Wetlands also play an important role in the health of our country and our communities,” says Hillary. “They remove sediments, excess nutrients and even bacteria from our drinking water. They are very effective at storing carbon. And much like a giant paper towel, they absorb and hold water, which buffers our cities and farms from floods and droughts — both of which are growing more common and extreme in recent years.”

NCC is contributing to wetland conservation not just by protecting existing wetland habitat, such as the Frog Bear Conservation Corridor, Luxor Linkage and the Kumdis Estuary, but also by initiating wetland restoration projects all across the province.

Wetland restoration projects in BC

The restoration of wetlands is a critical component of wetlands conservation. Simple actions such as fencing to keep out grazing animals allow a degraded wetland to recover in just a few years, rebuilding natural habitat used by migratory birds, amphibians, small mammals and other wildlife. And sometimes a completely transformative project is called for.

“We have had significant success in restoring wetlands that have been severely degraded by industrial activity,” says Hillary. “In just five years, the Campbell River Estuary on Vancouver Island was transformed from a lifeless post-industrial landscape into a thriving natural oasis. Fish and other sea life started to return within the first year of the restoration project.”

Inspired by that success, many new wetland restoration projects are underway in BC: