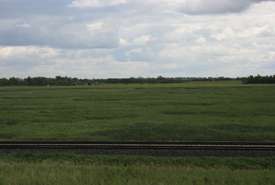 The Douglas Marsh Important Bird Area is home to over 160 species of birds. After learning about the birds that can be found in the area at a speaker event in the Town of Douglas, volunteers conducted an evening bird survey on the 105-hectare (259-acre) property.

Clear skies and low winds made for perfect birding weather, enabling volunteers to spot several different types of birds. While circling the marsh trying to track down an active LeConte’s sparrow, they spotted a bobolink, heard the call of a western meadowlark and the winnow of a Wilson’s snipe.

The volunteers hoped to hear yellow rail, an elusive bird designated of special concern by the Committee on the Status of Endangered Wildlife in Canada. Comfortable at home in the wet grasslands of Douglas Marsh, this nocturnal caller was not interested in starting its evening activities any earlier than it needed to.

Determined to hear its call, many volunteers remained on watch past 11 p.m. Their persistence was rewarded, as around 11:15 p.m. a growing number of yellow rails began to call over the marsh, occasionally joined by the song of a sora. NCC staff were excited to hear a good number of yellow rails this year, as observations at this site in recent years have been much lower than they have been in the past due to high water levels. Hearing the yellow rails and knowing that they are using the NCC lands reinforces the importance of the marsh and NCC’s work to help protect it.

Data from the bird survey will be incorporated into a baseline inventory and property management plan being developed by NCC in partnership with the Assiniboine Hills Conservation District (AHCD).

AHCD and NCC are partnering to establish an interpretive area on the Douglas Marsh property, with the implementation planned to begin later this year. The information collected through the bird and other surveys will inform the plans for the interpretive areas.

Support for this interpretive project has been provided to the conservation district by the Conservation Trust, a Manitoba Climate and Green Plan Initiative delivered by the Manitoba Habitat Heritage Corporation.

NCC's Douglas Marsh property was purchased in partnership with the Assiniboine Hills Conservation District, with further funding from the Government of Canada’s Natural Areas Conservation Program and Qualico.