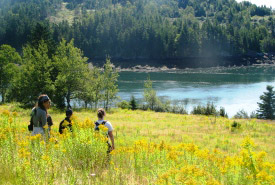 The Nature Conservancy of Canada (NCC) has been working in the Fundy Isles archipelago, acquiring land for conservation since 1999.

This is one of the few undeveloped, pristine island clusters left in Atlantic Canada.

An archipelago, being an expanse of water with many scattered islands, contains an unprecedented diversity and range of coastal and marine wildlife.

The area is an important nursery for whales with mother-calf pairs and juveniles being the most commonly sighted. This coastal habitat also attracts bird life, including raptors, such as the provincially endangered bald eagle and nationally threatened peregrine falcon.

Pendleton Island is a special 121-hectare uninhabited nature reserve owned by the Nature Conservancy of Canada.

It is part of the Deer Island Archipelago, which separates Passamaquoddy Bay from the southwest part of the Bay of Fundy.

Thomas Pendleton bought the land in 1796 and, hence, was called Pendleton Island. Several generations of the Pendleton family occupied the site, occupying two homestead sites, raising crops and grazing cattle until about 1935.

Since it was abandoned, the island became commonly owned by approximately 150 descendents of the late Ward Pendleton, under the Ward Pendleton Family Association, and one non-family member, Dr. Herb Mitton.

The Nature Conservancy of Canada commissioned a “family tree” for Ward Pendleton and through extensive research, 114 of the 150 known descendants were located and agreed to donate their interest to NCC, as did Dr. Mitton in order for the island to be conserved in its natural habitat.

Pendleton Island at a glance

The Island has interesting terrain. The northeastern shore has a bay with a steep, gravel barrier beach. It contains a coastal forest with red spruce, yellow birch, mountain ash and red maple trees. The shoreline fronts a mixed forest of white spruce, black spruce, balsam fir and tamarack.

The Nature Conservancy of Canada could not have achieved everything it has over the last 40 years without the support of volunteers, members and donors. Support of this project has enabled NCC to continue its land assembly and stewardship work in the Fundy Isles.

This 22-hectare island is also situated within the Deer Island Archipelago, in Passamaquoddy Bay.

NCC has reached out to area residents in cleaning up both Pendleton and Simpson Islands. NCC staff have carried out fun and educational Conservation Volunteers events, with people being transported by boat to clean up debris and help restore these coastal shorelines. NCC is grateful to all of the volunteers who have given a helping hand!

This property is part of a conservation project consisting of land purchase and donations, one easement donation and two voluntary stewardship agreements being undertaken by the Nature Trust of New Brunswick (NTNB).

Navy Island is a coastal island at the mouth of the St. Croix River Estuary, less than one kilometre from the town of St. Andrews. The island was once cleared of white pine for ships’ masts in the 1700s and later used for farming. Today, the forest is again in its natural state.

NCC partnered here in a joint project in 2009 to purchase eight hectares. NCC was pleased to work with the NTNB to keep Navy Island’s forests, beaches and intertidal zone intact for nature and education.

NCC wishes to acknowledge the Government of Canada in helping conserve Navy Island.

South Wolf Island is the southern-most island in the Wolves Archipelago, located in the Outer Bay of Fundy.

This 38-hectare island is held in conservation protection by a partner group, the Nature Trust of New Brunswick. In 2011, Connors Bros. Clover Leaf Seafood Company donated the site to NTNB.

To help undertake this conservation project, NCC provided a funding contribution from its own agreement with Environment Canada.

NCC granted up to $40 million in funding from the 2007-2012 Federal Natural Areas Conservation Program, reviewing and approving applications from other qualified organizations in Canada. These funds were designed to help build capacity for partner groups and smaller land trusts across the country.

South Wolf Island at a glance

The island is essentially wild and unspoiled: virgin coniferous forests harbour deep carpets of lichens and mosses, and three common species of orchid are abundant.

The Wolves Archipelago has species not commonly found on the mainland. This area has received international recognition as part of an Important Bird Area and has been described as an Environmentally Significant Area for birds by the Province of New Brunswick.

The area is also an important overwintering and staging ground for the endangered harlequin duck.