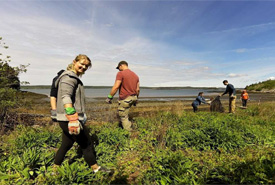 The Musquash Estuary Nature Reserve got its start thanks to the concern of a few caring people, and it has grown thanks to the generosity of many.

In the late 1990s, local residents formed the “Friends of Musquash” and advocated for the protection of the Estuary as a federal Marine Protected Area and protection of the surrounding lands, which were at the time slated to be developed as an industrial park. Life-long Musquash resident Mabel Fitz-Randolph loved the estuary and its wildlife and was a founding member of the group. Mabel later donated a significant portion of her land on the estuary to the Nature Conservancy of Canada (NCC) for conservation. Her daughter and grandson, Marie and Daniel Trembley, made a further donation of family land in memory of Mabel and her husband, Albert Fitz-Randolph.

Another longtime resident and business owner, Andrew (Andy) Simpson, supported the building of public trails on the estuary. When Andy passed away suddenly in 2015, his brother, Doug, and nephew, Luke Simpson, honoured his wishes and his memory by contributing nearly 243 hectares (nearly 600 acres) for conservation.

Other contributing families include Janine and Bill Blaine and Deborah and Todd Christiansen (Philip E. Plante memorial property); Sean and Rhett Foss; Michael MacLean and Matthew and Valerie Mawhinney. All have contributed to building the Musquash Estuary Nature Reserve by donating portions of land or resources.   These families and their legacies have inspired others to help NCC expand and care for the nature reserve. Our vision is to one day see all the land protected around the Musquash Estuary, to ensure this unique landscape remains wild for the long term.

We would like to recognize our partners and donors who have supported and continue to support this vision: