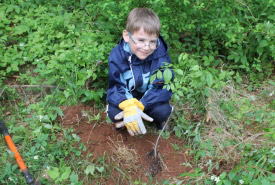 This coastal property represents one of the largest remaining undeveloped areas along the southern reaches of the Northumberland Strait in New Brunswick, making it a critical area for protection.

The Nature Conservancy of Canada's (NCC's) work in this area started in 2010, when it acquired a landmark site from the Girl Guides of Canada. The project was a split receipt — a partial land donation and partial land purchase. The donor had owned a property for more than 50 years and operated a popular retreat named Camp Wegwamageek.

Prior to that the site had been cleared for farming, which destroyed many of the trees. Meanwhile, a number of existing trees on the site are coming to the end of their lifecycle.

The Nature Conservancy of Canada has reached out to private land owners and have purchased three other nearby/adjacent sites to expand this nature reserve.

Baie Verte at a glance

The Nature Conservancy of Canada has started its first ever Acadian Forest Restoration Project here.

After months of planning, NCC held a Conservation Volunteers event with Community Forests International on the Baie Verte site. The goal of the event was held to help people and families learn about this important area and why certain trees are replanted.

Volunteers planted more than 2,100 hardwood and softwood seedlings during this event. NCC hopes that by reintroducing a diverse mix of trees in the area, they will be tolerant and live for hundreds of years.

“This is a multi-year project. We will closely monitor how the site develops in terms of what is successful and what strategy should change,” said Laurel Bernard, director of stewardship for the Nature Conservancy of Canada.

All about the Acadian forest

The Acadian forest began developing more than 10,000 years ago when the glaciers began moving north after the last ice age. New Brunswick’s forest is a meeting place where the northern boreal forest blends with southern hardwood forests, creating remarkable biodiversity and beauty.

There are 32 native tree species found in New Brunswick’s forest. The Acadian forest has the ability to grow to be a very old forest. In fact: