It started with a hatchet and a dream 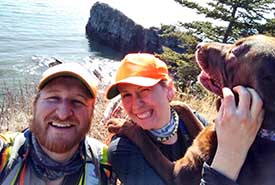 Leah Alexander, a devoted nature enthusiast, was raised in Lorneville, New Brunswick. When not working as a registered nurse, you can find Leah and her partner, Adam Wilkins, working on projects through their non-profit community group, Explore Lorneville Inc. The group helped maintain and restore the Musquash Head Lighthouse and created Split Rock, Troy’s and Lorneville Link Trails. Their community of supporters connects through their Facebook Group, Explore Lorneville Inc: Musquash Estuary Coastal Trails.

Growing up in Lorneville, Leah and her brother were continuously encouraged to show passion and affection for the outdoors and nature. Leah’s mother was an advocate for nature and petitioned against dumping in Lorneville. Leah was still very young when she helped her mother campaign to protect Lorneville’s wild places. Distributing flyers from house to house and her mother’s and community members' enthusiasm made the campaign a success story, at least on paper. Lorneville still saw illegal dumping throughout the village; wildlife was displaced by old mattresses, TVs and other household items that people no longer wanted.

Many years later, as a university student, Leah was still concerned about the state of her village, so she decided to step in. “Picking up garbage one piece at a time,” says Leah, “was not an efficient way of bringing Lorneville back to its healthy state.” So she took a bigger step forward.

On a late summer day in 2014, Leah embarked on a walk along the coastline, from the village of Lorneville to the Musquash Head lighthouse with her dog, Cash. The lack of trails and overgrown forest made the walk a challenging one. But the breathtaking views were motivating. With only a hatchet and a set of loppers, Leah’s dedication and drive pushed her to cut a path bit by bit, exposing scenic views of the Bay of Fundy. Leah envisioned a Lorneville that hikers, birdwatchers and travellers could care for and appreciate.

What began as simply removing illegal dumpsites has evolved into a larger calling. Leah did not stop. After completing the Split Rock Trail, she moved on to her next project. Leah’s work on this second trail is especially meaningful for her. She describes the work as therapeutic. The power of nature helped her find peace after the sudden loss of a friend who took his own life. Troy’s Trail is not just another beautiful hiking route; it is a permanent tribute to a dear friend.

The wilderness trails that Leah and Adam have worked on connect to the Nature Conservancy of Canada’s Five Fathom Hole and Black Beach Trails, and the trail network extends from the community of Lorneville to Prince of Wales.

Now is the perfect time to enjoy the scenery that New Brunswick has to offer. Less than 20 minutes away from uptown Saint John, at Musquash Estuary, you can visit the over 20 kilometres of trails that Leah, Adam and the community have helped develop and maintain. While at Musquash, keep a lookout for species like peregrine falcon, moose, white-tailed deer and harbour seal. Visit Nature Destinations for more information on the Musquash Estuary, how to get there and where to hike.

Explore Lorneville Inc. has played an essential role in bringing the community together. Their work in raising money and awareness for the protection of critical natural areas needs well-deserved appreciation. In 2020, Explore Lorneville Inc. donated 37 hectares of land at Musquash Head to NCC, to be protected as part of the Musquash Estuary Nature Reserve. The group owns and manages six hectares of land around the lighthouse and the lighthouse itself. In collaboration with NCC, and with tremendous community support, the Musquash Head lighthouse also received some much-needed maintenance and care in 2020. This restoration saved the iconic lighthouse at Musquash Head from being removed and replaced with a light pole, as has happened in other coastal communities.

Passionate about protecting natural areas, Leah believes that “people need to see these beautiful areas; we have to show them off and let people see what incredible value these places have. Once they see it and respect it they will be more likely to stand up and want to protect it.”