Ducks on the Grand Codroy River (Photo by Mike Dembeck) 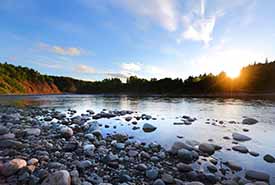 The Southwest Newfoundland Natural Area is one of the most diverse regions in Newfoundland and Labrador and contains large, connected regions of balsam fir forest. The serpentine land forms in this Natural Area, some of which are protected within Gros Morne National Park, are geologically significant on a global scale. Almost 40 per cent of the sandy beaches and dunes on the island of Newfoundland are found in the southwest.

Newfoundland’s most productive and valuable wetland, the Grand Codroy Estuary, is located here. More than half of the bird species in the province have been sighted in the Codroy Valley. This Natural Area also contains salt marshes, uncommon on the rest of the island of Newfoundland, which provide habitat for waterfowl, seabirds and a number of other plants and animals. Large majestic rivers, such as the Humber River, renowned for healthy populations of Atlantic salmon, are also characteristic of this area. 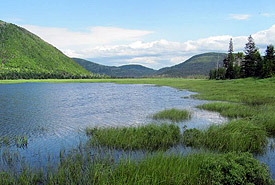